In 1982, the billionaire duty-free shopping magnate Chuck Feeney made a decision that would dramatically alter the course of his career and change his legacy forever: he founded a philanthropic organization, The Atlantic Philanthropies, and made a $7 million donation to Cornell University. Two years later, Feeney transferred his entire $1.6 billion stake in his company to The Atlantic Philanthropies (a move that the world did not find out about until 1997), and the organization has since gone on to make $6.5 billion worth of grants, in large part to fund construction projects that changed lives. Now, the organization is winding down, with its planned closure scheduled for 2016. To celebrate almost three and a half decades of giving, the organization has released "Laying Foundations for Change: Capital Investments of The Atlantic Philanthropies." The following excerpt is taken from the book's foreword by President and CEO Christopher G. Oechsli, originally titled "What This Book Is About."

Imagine having the resources to build something that can dramatically alter the lives of people, communities, even nations. Conversely, imagine an unassuming man coming to you and asking what you could build to change many lives, of the people in your community or even your nation. Imagine the possibilities. That’s what this book is about. It’s about fields of dreams, and about the people who were asked to imagine what could be built upon those fields to improve the lives of people, and of the people who come and till those fields and are part of that change. It’s a visual and narrative story of Charles Francis “Chuck” Feeney and The Atlantic Philanthropies and what literally laying the foundations for change means for people and nations.

A brief bit of background on Chuck Feeney (the full story is told by Conor O’Clery in his biography The Billionaire Who Wasn’t): Chuck co-created the world’s largest and most successful duty-free retailer and in turn spawned successful investments in other global enterprises, through his business vehicle the General Atlantic Group, ranging from Pacific resorts to early U.S. Internet technology companies, and a lot in between. But that was just the beginning; just a platform for his life’s work. The wealth that Chuck and his business teams generated was placed in a different kind of investment vehicle for a higher type of return. Chuck’s vehicle became The Atlantic Philanthropies, and the quest for visible improvements in the human condition became his measurement for rate of return on its investments.

The roots of this book lie in Chuck’s fundamental request of Atlantic’s philanthropy: “What will we have to show for it?” Showing what is possible, what is achievable, is not easy because the ripples of the visible extend well beyond the ken of photography, and beyond narrative. With the help of Magnum’s photographers and photography students from seven Atlantic regions, we have tried to capture the visible and glimpse the spirit of the less visible.

First, and most visibly, we have captured in the first volume a few of the many buildings that were supported— some inspired—by Chuck Feeney and Atlantic. The Compendium tries to capture the more comprehensive breadth of that sweep and includes a summation of more than 300 capital projects. Chuck has always wanted to help people in tangible, lasting ways. Capital investments are concrete manifestations of his philosophy of Giving While Living. In his inimitable American Zen articulation: “Good buildings for good minds can make a big difference in the lives of a lot of people.” Capital projects account for almost one third of Atlantic’s total grantmaking of $6.8 billion, as of August 2014.

But the buildings that Chuck and Atlantic launched have always been about the people who dreamed them and who inhabit them: the leaders, innovators, scientists, educators, medical doctors, nurses, students, patients, social workers, community and rights activists, athletes, thespians, musicians and audiences. The buildings are intended to house and serve young, vulnerable children; curious and aspiring youth; engaged professionals and dignified elders. They are the homes, the incubators of change, in the lives of those who come to them.

Atlantic’s programs complemented these facilities. Among the buildings in this book you will glimpse in people’s eyes some of the less visible, but most essential, impact that these buildings and programs have made. These faces speak volumes.

Beyond even the buildings and the people, Atlantic’s investments enhance economic development and build communities. The University of California, San Francisco’s Mission Bay campus; Royal Melbourne Institute of Technology University’s Saigon South campus; Parkville Precinct in Melbourne; Cornell NYC Tech, Roosevelt Island; Queensland University of Technology’s Kelvin Grove campus; University of Limerick—virtually all hatched with Chuck personally engaged at their inception—are a few examples. The ripples of jobs, innovation, cultural energy, health and connectedness are barely hinted at in this book. But if you read the notes of those who are in the middle of these projects and look at and invest some sober imagination in the photos, you can’t escape the implication that these buildings and the activities they house are central to lifting up entire communities, and, yes, even nations.

It is not in Chuck’s character to take credit. He knows opportunities and achievements are due to many people—and Chuck and Atlantic have bet on, supported and worked with many great and inspiring people, quite a few of whom prefer to remain anonymous. No buildings bear Chuck’s name, though in a couple, someone managed to sneak a plaque onto a wall, unable to bear to think that Chuck’s munificence might go unnoticed. But Chuck himself has been clear about this. He has been known to insist that if a name is to appear somewhere on a plaque or honor roll it be the name of another donor who was willing to take Chuck’s challenge to contribute in a big way. Or that it bear a modest reference to The Atlantic Philanthropies. Why? There have been more than 300 Atlantic employees in seven regions over more than 30 years investing themselves in helping to build others’ dreams. There have been more than 6,000 grants to more than 2,000 grantees in that period. Atlantic’s team, these grantees and their staffs, are the architects, the designers, the engineers, the builders, the laborers and maintenance crew, literally and figuratively, for all of Atlantic’s works. Though too numerous to name, each deserves praise for what you see in these volumes and beyond.

It is, however, inescapable that Chuck Feeney has been the force at the inception of these works, a formidable force for good and for building more good. It is our hope that Chuck’s and Atlantic’s work—as captured here—might inform and motivate others to engage in similar efforts to improve lives. No doubt, if you build it, that change will come.

Christopher G. Oechsli is President and Chief Executive Officer of The Atlantic Philanthropies. 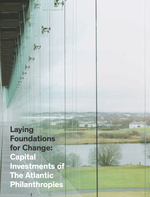