Save
Charles Eames' Advice for Students
Share
Or
Copy

Few in the twentieth century straddled the demarcation between design and architecture as effortlessly – or as successfully – as Ray and Charles Eames. For the Eameses, the distinction was artificial and unhelpful; useful creative thought emerged from a process-based method of problem solving, design solutions addressed and resolved specific needs, and success could be effectively measured by an object’s ability to do its jobs. But while the Eameses were famously weary of design’s historical tendency toward “creative expression,” their work exhibited none of the abject sterility threatened by a devotion to extreme functionalism. They found that delight was itself utilitarian, and an object’s capacity to produce pleasure for its user allowed for the consideration of aesthetics as one metric of serviceability. From this belief in the unity of performance and perception emerged some of the century’s most iconic designs: Case Study House #8, the Molded Plywood Lounge Chairs, and the 670 & 671 Eames Lounge and Ottoman.

The forthcoming An Eames Anthology, edited by Daniel Ostroff and published by Yale University Press, chronicles the careers of Ray and Charles Eames in their pursuits as designers, architects, teachers, artists, filmmakers, and writers. As Ostroff attests, with over 130,000 documents archived in the Library of Congress, the Eameses were nothing if not prolific; this volume, accordingly, is not comprehensive so much as representative, curated to reflect the breadth of interests and accomplishments of the pair.

In preparation for a 1949 lecture at the University of California, Los Angeles on “Advice for Students,” Charles made the following notes on inspiration, methodology, and career strategy. They are excerpted here from An Eames Anthology:

Make a list of books
Develop a curiosity
Look at things as though for the first time
Think of things in relation to each other
Always think of the next larger thing
Avoid the “pat” answer—the formula
Avoid the preconceived idea
Study well objects made past recent and ancient but never without the technological and social conditions responsible
Prepare yourself to search out the true need—physical, psychological
Prepare yourself to intelligently fill that need

The art is not something you apply to your work
The art is the way you do your work, a result of your attitude toward it

Design is a full time job
It is the way you look at politics, funny papers, listen to music, raise children
Art is not a thing in a vacuum—
No personal signature
Economy of material
Avoid the contrived

There are things you can do to prepare yourself—to be desirable
orderly work habits
ability to bring any job to a conclusion
drawing feasibility
lettering
a presentation that “reads” well
willingness to do outside work and study on a problem . . .

Primitive spear is not the work of an individual nor is a good tool or utensil.
To be a good designer you must be a good engineer in every sense: curious, inquisitive.
I am interested in course because I have great faith in the engineer, but to those who are serious
(avoid putting on art hat) Boulder Dam all’s great not due engineer
By the nature of his problems the engineer has high percentage of known factors relatively little left to intuition
(the chemical engineer asking if he should call in Sulphur) 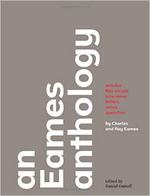 An Eames Anthology
Buy on Amazon