From the publisher. a+u March 2015 is a special issue on London and Zurich based Caruso St John Architects, led by Adam Caruso and Peter St John.

The issue features 19 works with a focus on their recent renovation works including the Tate Britain, Millbank Project in London, Chancel at St Gallen Cathedral in Switzerland, and Liverpool Philharmonic Hall with its first stage recently completed.
The latter half of the issue features their on-going projects in Switzerland, Germany, Belgium, and France including Bremer Landesbank and Lycée Hotelier de Lille.

Opening essay, by former editor-in-chief of AMC magazine Dominique Boudet, surveys Caruso St John's early to recent works. The essay by Jay Merrick, the architecture critic of The Independent, gives us the details of the Tate Britain's renovation work. Third essay by Adam Caruso talks about his and Peter St John's method of working with references. 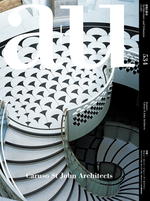