Published by the Pontificia Universidad Católica de Chile as part of their ARQ DOCS series, "Pier Vittorio Aureli" features two in depth interviews with Aureli, the high-profile Italian theorist and co-founder of design and research studio DOGMA. The book's introduction, written by Emilio De la Cerda is excerpted below.

The work of Pier Vittorio Aureli constitutes a rigorous effort of thought regarding architectural discipline and the political dimension enclosed by the specificity of form. It is an approach focused on the power of the project, a speculative but delimited tool, which allows overcoming the paralysis of diagnosis and the abuse of diagrams, in order to establish a decisive commitment with the concrete reality of the city.

This line of thought, which is introduced here through two interviews conducted in 2010 and 2012 by Felipe De Ferrari and Diego Grass —architects and professors in our school—recognizes the profound historical and collective tradition of architecture, showing itself distant from those conceptions that see both creativity and the subjective originality of form as a sort of ethical manifest. Far from celebrating authorial genius, Aureli insists in the inseparable link that exists between architectural production and the cultural realm in which it develops.

A fact that results particularly noticeable and refreshing, is that his search does not neutralize or underestimate the scope of form, but rather recognizes in architecture an active agent of transformation and, in its broadest sense, of resistance. On this basis, it is possible to understand how intentioned are the reflections he proposes about the substantial difference between concepts such as ‘archetype’ and ‘typology,’ or the accurate questions concerning the political nature of façades, and the clearly defined agenda underlying the drawing of a plan.

Aureli’s work understands both theory and project as two extremely related, almost inseparable dimensions of architecture: in a way, every formal realization takes its premises from a particular system of thought. A critical and informed conscience of these sources will enable the understanding of the scope of the architectural fact and to reestablish its hierarchy in the processes of transformation of the built environment.

These interviews also convey some lucid ideas about the teaching of architecture, highlighting the value of collaboration in the process of learning, and questioning the pertinence of models based in competitiveness and the almost exclusive celebration of individual skill. For if the city is the battlefield, a more precise comprehension of the collective role inherent to every architecture project is required.

Understanding the collective and historical dimensions of his work, Aureli enters a permanent dialogue with the work and thought of a diverse array of architects such as Zenghelis, Piranesi, Ungers, Boullée, Koolhaas, Hilberseimer, Alberti, Palladio, KGDVS, Rossi, Caruso St. John, Price, Branzi, among others. This effort recognizes in each one of them an agonist, and reaffirms the will of unveiling a theory and practice informed from disciplinary sources.

We hope this publication may serve as a means of celebrating his second visit to the School of Architecture at the Universidad Católica de Chile, and also as a way of putting forward his ideas and proposals to students, educators, and researchers of our academic community.

Emilio De la Cerda is the Director of the School of Architecture at the Universidad Católica de Chile. 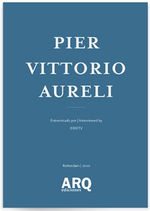