BI is a publication focused on the exchanges between architecture and its wider cultural context; it consists of short extemporaneous texts with longer studied pieces from a multitude of perspectives. The following is an excerpt from its latest (and first print) edition, FREE, written by the editors-in-chief E. Sean Bailey and Erandi de Silva.

There is implicit conflict in the word ‘free’. While culturally we celebrate the infinite opportunities afforded by the ‘freedom to’, the term also alludes to emancipation, a break from a captive state, or a ‘freedom from’. ‘Free’ is, at its core, an architectural concept. Architecture is a discipline directly engaged with shaping enclosure, of erecting and toppling barriers or—more explicitly—of extending and limiting ‘freedoms’.

Spatial interventions have reorganized much of the material and immaterial world. These actions are evident in the revolutionary public protests of the Arab Spring, the rehabilitation and adoption of land in Detroit and the invention and immanence of digital space. These types of reconfigurations offer a means of breaking with the past to establish new paradigms of operation and actualization. On the other hand, a lack of intervention can also prove to be equally liberating by allowing existing conditions to flourish, whether in nature or an alternate wilderness.

Alongside its implications on architecture’s engagement with boundaries, ‘free’ impacts the artifacts that architects produce, through cultural concepts such as style and taste and disciplinary limits such as format, which designate what essentially constitutes an architectural product. Like many other fields, architecture, in the wake of postmodernism’s abundant referencing, is in the process of liberating itself from dominant singular agendas and acknowledging the emergence of multiple simultaneous positions. Generative design strategies that exist alongside more intuitive or responsive approaches represent just one such example. Contemporary technologies enable architects to integrate disparate references quickly through an endless array of mechanisms, from the digital overlay of images to the scripted agglomeration of styles and, even, the creation of spatial products that escape form altogether. In this new landscape, in which unlimited referencing is permitted, definitions are stretched and loosened—ambiguity abounds.

Accordingly, the vague paradigms of what constitutes architectural production and authorship of a design are further obscured by the necessity of collaboration. Clients control the finances, distributing capital and opportunity, but only once expectations are satisfied. Civic officials force architects to play by, or with, the rules. Structural limitations are set and enforced by engineers who adapt the architect’s designs for constructability. Accrediting bodies dictate what is architecture and who is an architect. Professional codes of conduct even inhibit architects’ abilities to express their inner inclinations, be they dimensional, stylistic, financial, sexual or otherwise. When not working for ‘free’, the architect’s ability to act ‘freely’ is frequently challenged with results that occupy a spectrum ranging from the beneficial to the unfortunate.

Pairing short extemporaneous texts with longer studied pieces, this volume, the first print publication from BI, presents a wide view on the notion of ‘free’, bringing together a multitude of perspectives, drawn from within and beyond the discipline, that together explore the term’s implications on architecture today. 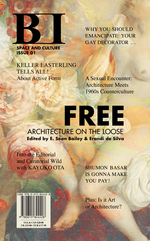