Designed by Javier Mosquera González, the Winner of the Contest for the Cultural Center of Chapultepec, pretends to act as a lighthouse of culture, including intermediate spaces, high rise gardens and a sequence of solid and filtered spaces.

The neighbourhood of Chapultepec holds a great cultural activities in the streets. Bookshops, temporary exhibitions, cafes and outdoors concerts among others, have become this part of the city in one of the most actives of it. For all of them, a reference in the city, a cultural lighthouse that stands over the surrounding buildings. It can be seen from every place in the city. An urban landmark.

The Av. Chapultepec corner where is placed the building, frees its groundfloor letting the pedestrians walk freely trough it. Some public gardens are designed between the building supports. Thanks to this operation, the building rises and its volume is divided in several pieces. They are stacked up in high and separated by empty spaces. The city has four public squares, besides the one in the groundfloor, to develop exhibitions and cultural activities in the open air. Exterior public spaces are multiplied. At the same time, the volumes between the empty spaces hold the main program of the building. The basement has three storeys with the parking needed. The access to them is made by to elevators, reducing the space required by a traditional ramp.

As the vegetation defines de main avenue and organizes the groundfloor, the empties generated in the upper floors, are completed with native vegetation creating outdoors gardens. Exhibition spaces where to admire the city of Guadalajara and where to celebrate all kind of events. Vegetation as an element not only bound to the ground but as a possibility to create pleasant spaces in higher levels.

The interior of the cultural center is thought as a series of spaces generated by the wall frame of the building. The rooms are defined in such a way that the center can be organised in several ways and without any pilars difficulting the views and the layout of the rooms. Some empty spaces in the floors create a diagonal relationship between the spaces. The cultural center as a whole formed by multiple places holding cultural creations.

The building construction consists in for concrete cores that hold some boxes made of load bearing walls, which rigidity is guaranteed by the interior wall frame that creates the exhibition rooms. Big concrete boxes holded by facilities cores. The façade is made of perforated steel panels with different diameters, letting the light go inside in a proper way. Solar panels and rain water collection systems as a support to the cooling and heating system will guarantee an optimal energetic efficiency. Those, joined to the premise of less frigories and more common sense, must define the aim of such an important institution for the city of Guadalajara, as the CCCH will be, lighthouse of its culture. 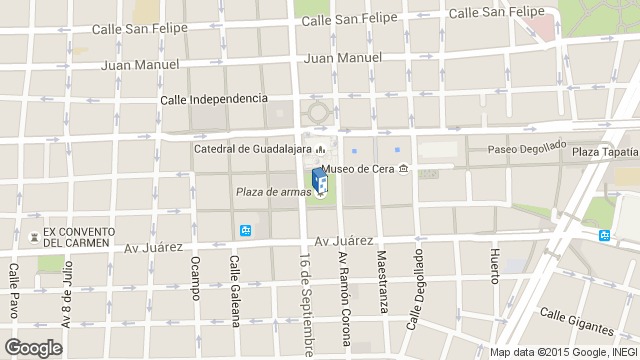