On May 11, 2011, the performance of Aeschylus’s Prometheus Unbound premiered on OMA‘s (Office for Metropolitan Architecture) stage set for the Greek Theatre in Syracuse, Sicily. The design consists of three transformable architectural devices that can be reinterpreted among the different spaces of the theater. These devices date back to 5th century BCE. 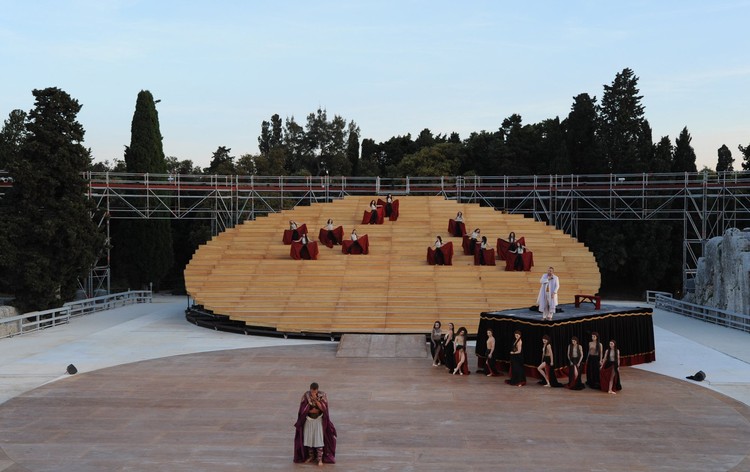 The interventions designed by OMA consider adaptive strategies for three different plays that will be staged this summer by the Istituto Nazionale del Dramma Antico, which includes Aeschylus’s Prometheus Unbound (directed by Claudio Longhi),  Euripides’ Bacchae (dir. Antonio Calenda) and Aristophane’s The Birds (dir. Roberta Torre).  The three interventions, the Ring, the Machine, and the Raft, create distinct spatial configurations in the theater.

The first intervention, the Ring, is a suspended walkway that completes the semi-circle of the terraced seating, encompassing the stage and the backstage, and giving actors an alternative way of entering the scene.

The Machine is a fully adaptable backdrop for the plays: a sloping circular platform, seven metres high, mirroring the amphitheatre. The backdrop can rotate, symbolizing the passage of 13 centuries during Prometheus’s torture; split down the middle, it can also be opened, allowing the entrance of the actors, and symbolizing dramatic events like the Prometheus being swallowed in the bowels of the earth.

The Raft, a circular stage for the actors and dancers, reimagines the orchestra space as a modern thymele, the altar that in ancient times was dedicated to Dionysian rites.

The Greek Theatre scenography – executed by AMO, the unit within OMA dedicated to non-architectural and transient projects – is part of the office’s long history of designing innovative performance spaces, from the Netherlands Dance Theatre (1987) and the Wyly Theatre in Dallas (with Rex, 2009), to the Taipei Performing Arts Centre – three adaptable theatres plugged into a central cube, now under construction in Taiwan. AMO has also designed scenography for ephemeral events such as Prada catwalk shows and Francesco Vezzoli’s 24-Hour Museum in Paris earlier this year.