The FaBRICKate was developed primarily in the McNeel's Rhinoceros, using a plugin called RhinoVault which enables "funicular form-finding." RhinoVault works with structures that operate only in compression, and provides organic objects with real-world structural stability. It was developed by the BLOCK Research Group at ETH Zurich and is available for free download here.

The ADAPt team began with a plan and used RhinoVault to generate the 3D form. As the form was investigated, the team came closer and closer to reaching a vertical and horizontal equilibrium in the forces acting on the vault, and after 1410 iterations they hit the sweet spot. By applying the analysis of additional software, they were able to reinforce their original data and produce an extremely stable and visually interesting object.

Both Karamba and Grasshopper were then employed to simulate wind force and material properties, to ensure the effectiveness of the vault in real-world conditions. Two waffle grids - one as an overall grid, and a second, smaller one to help define the areas with more differentiation in their curvature - were applied to the structure as a series of steel rods.

Five different brick patterns were utilized in the design to maximize the flexibility of this traditionally linear material. By laying different sized bricks in different ways, it resulted in an interesting surface pattern.

For more information, including some videos of the FaBRICKate in action, head over to their Instagram. 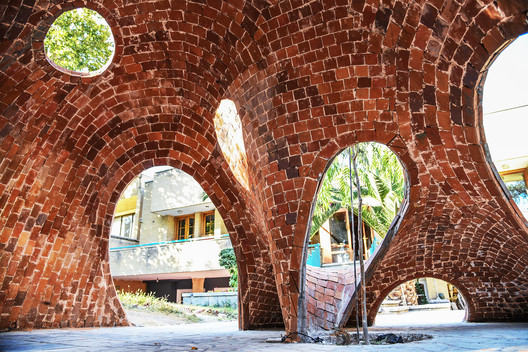