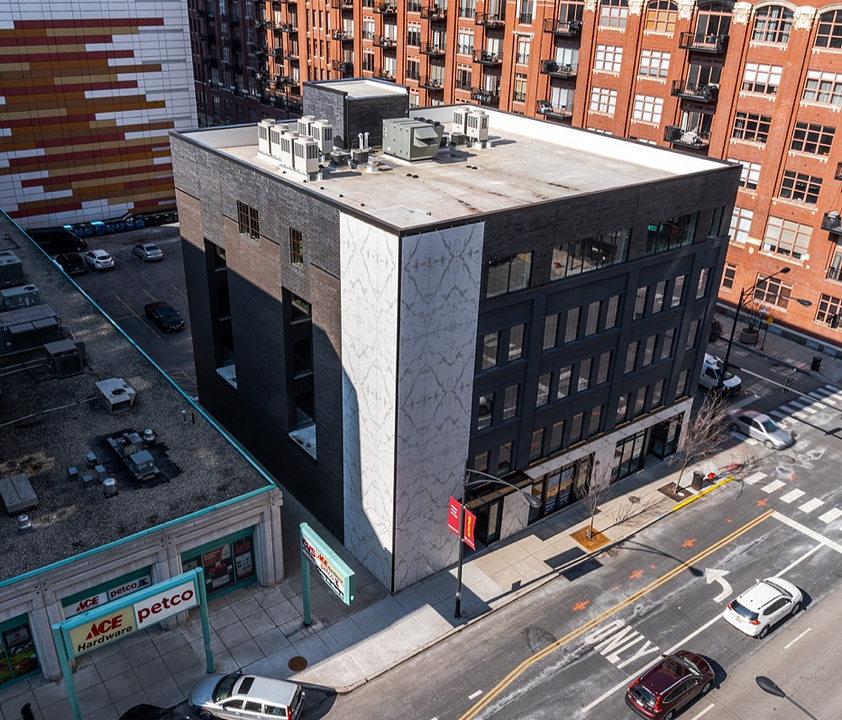 In the heart of Chicago sits 444 N Orleans, a recently refurbished building with a striking façade featuring a corner fully clad in Dekton large-format slabs from Cosentino; daringly contrasting with the classic brick which can be seen across most of the city.

Dekton Resists Even The Most Extreme Conditions

Every construction project in Chicago is met with a major setback in the form of unbelievable variations in temperatures that affect the city all year round. The summer sees temperatures of around 30 degrees Celsius and arctic winds turn the city into a -29 degree icebox in winter. Snow and humidity acting on exposed external surface materials push them to the limit.

Many materials lose their properties when exposed to such extremes including their color. This fact led the architects of 444 N Orleans to Dekton, Cosentino’s ultra-compact surface since it is able to withstand major thermal variations, highly humid environments, and high UV insolation.

The feature corner of 444 N Orleans needed to be an elegant color that spoke about the city's natural surrounds. The building is set on the shores of vast Lake Michigan, which is usually frozen over in winter. Aura 15 was selected with white tones and greyish veining evocative of the whimsical patterns and images which form on the lake during the harsh winter.

The large-scale effect was enhanced by Dekon's ability to provide a continuous vein across the façade pattern. A challenging design to implement but one with tremendous impact. Given that the cladding was for the external façade, the project leaders sought out a material that would be well-resistant to staining and, in particular, to graffiti – a universal urban challenge. Dekton met this requirement.

A Ventilated Façade That Was Secure And Quick To Install

To install this façade, a company with intimate knowledge of Cosentino's materials and how to optimize their use was brought in; Stone System installed a ventilated façade because, among other reasons, of the properties, it offers to the building in terms of thermal and acoustic insulation.