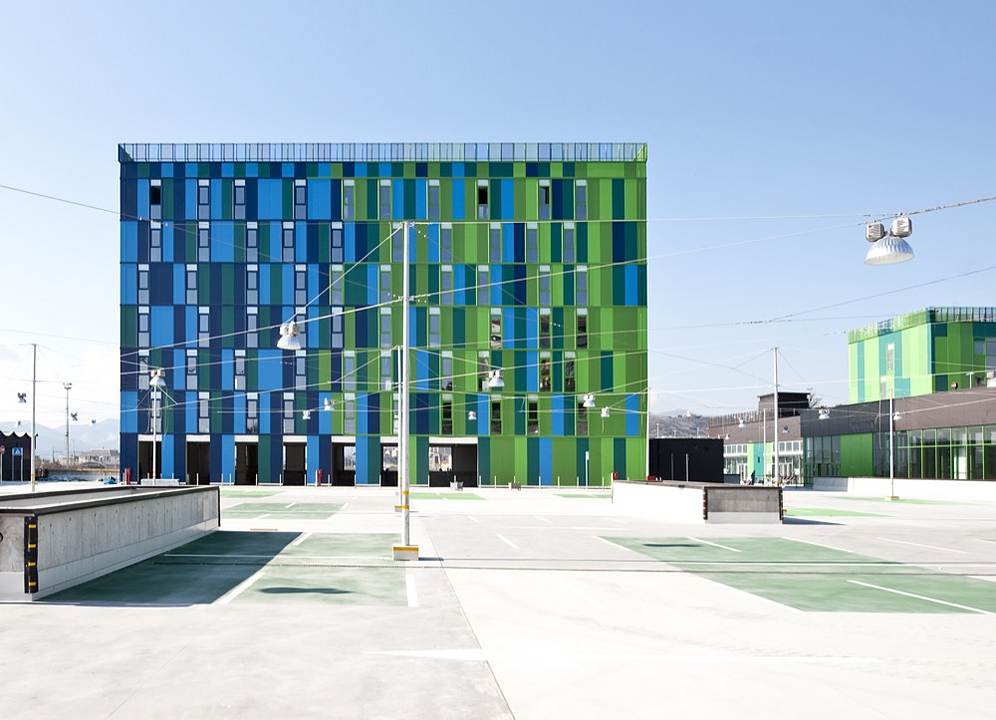 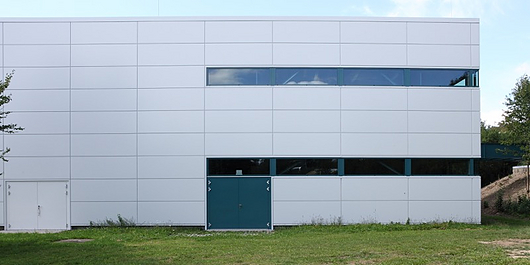 This high school where the sports hall was located was subject to a preservation order and was due to undergo a comprehensive façade refurbishment. The approval according to monumental protection laws for the refurbishment was considerably facilitated by the product Qbiss One.

The Trimo Qbiss One façade elements were an ideal solution for the sheet-metal façade as they could be used in a way that preserved the grids and the optical appearance in detail of the original façade, whilst replacing it with highly insulated and windproof elements. 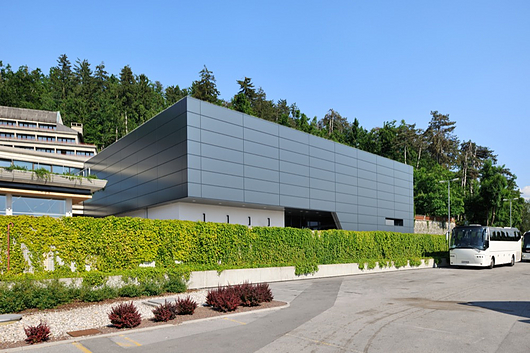 This indoor swimming pool built in 1972 from reinforced concrete slowly started to lose its initial function as the original cladding material aged. Due to the increase in tourist visits to Postojna cave, the investor decided to renovate and totally change the use of the building. They chose Trimo’s products as the most suitable construction elements to impart a minimalistic clean facade look, drastically improve the thermal performance and fire safety of the building.

The most exposed sides of the facade use 150 mm thick Qbiss One system in Anthracite in an average length of 4 m. The entrance uses prefabricated transversal inclined corner elements that seamlessly finish the composition of the facade. The fourth facade was renovated using Trimoterm FTV fire-resistant sandwich panels. The whole renovated facade used 821 m2 of Qbiss One system and 223 m2 of Trimoterm FTV sandwich panels. The flashings for a base detail, corner elements, parapets, windows were all delivered by Trimo. 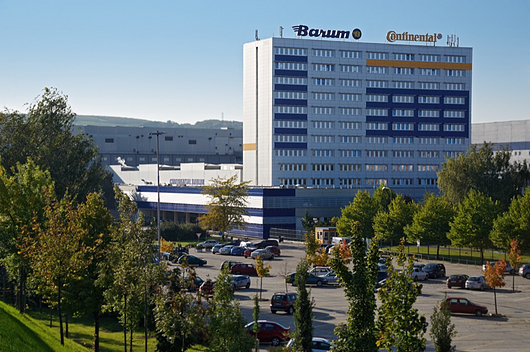 The administrative center at the entrance to the production plant at Continental Barum Otrokovice that produces car tires, buses and mostly agricultural mechanisms consists of two buildings of 12 and 2 floors respectively. It was built in 1970 together with the first production halls of the Barum company. The original façade system used Boletycké panels as a cladding system with a steel frame, filled with glass wool, and finished with a glass cover. This kind of cladding system was typically seen in administrative and civil/public buildings all around former Czechoslovakia.

The old façade system’s warranty was no longer valid and technical characteristics did not fulfill thermal insulation, air, and water tightness requirements, so the investor decided to replace it as part of the total renovation of the existing building. The advantages of the Qbiss One system such as fast installation, solid elements with excellent thermal properties, air, and water tightness, convinced the investor and general contractor to change the existing material. Trimo’s responsive technical support was able to change existing plans accordingly and finished the 3 – 6 months load of work in just 6 weeks, so as not to interfere with construction plans.

200 mm thick Qbiss One elements were designed in non-typical widths of 825 mm (due to previous raster and architectural design), 1,2 – 2,4 – 3,6 m lengths (module of windows) and in 3 color shades (RAL 9006, RAL 5003 and RAL 1028. The horizontally installed system uses prefabricated corner elements.

Trimoterm on the redevelopment of the former Metalmetrone textile machinery factory, Italy 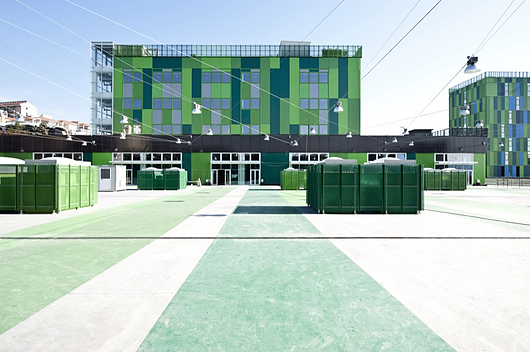 Metalmetrone, one of the country’s largest textile machinery factories closed down in 1992. After fifteen years and the various proposals to reuse the large area where the factory stood, Studio 5+1AA the architecture firm of Alfonso Femia and Giancarlo Peluffo, was chosen for a complete redevelopment of the abandoned 115.000 m² industrial site. The long curved representative building of that time is the only one that survived complete demolition and is closely connected with the new Le Officine Metalmetron complex behind it.

The new complex became a multifunctional center of mixed-use from retail and business to a hotel with parking facilities. On the 102-room and 4.000 m2 big hotel, built as a tower, a vertical Trimoterm FTV facade system in 5 colors from green to blue is installed. The Architects made a colorful composition with vertically installed Trimoterm FTV prefabricated panels. The colors unify the complex and also the newly created public square.