Save
Architectural Voices of India: A Blend of Contemporary and Traditional Ethos
Share
Or
Copy

Indian and global architecture has continually been represented, deliberated and discussed by several architects across different platforms. Architectural Voices of India: A Blend of Contemporary and Traditional Ethos brings out the voices of 17 iconic architects from India across generations on a common platform, and through dialogues probes into the core issues and perspectives around architecture. These voices bring to the forefront unique and inspirational journeys, varied design philosophies and building typologies, the evolution of architecture and a reflection on the new role that architects should play, and the state of the profession in India and globally.

Apurva brings together some of the renowned “missionaries of Indian architecture” who have given the profession its identity. The book talks about architecture being an integral part of building a nation and has takeaways for all genres of readers including those from the architecture and building industry, the students’ community, and the common man.

The book articulates the observations, beliefs, sentiments, perspectives and vision of an entire gamut of architects— right from the legendary BV Doshi, Raj Rewal and Shiv Dutt Sharma to the contemporary Morphogenesis, Kamal Malik and Sanjay Puri, from the sustainability experts Abhikram and Sanjay Mohe to the urban planner Christopher Benninger, from the versatile Prem Nath to the conservationist Brinda Somaya, and many more of such India’s illustrious architects. It also throws a glance into their projects as well as their personal spaces. The foreword has been written by Dr. Vikramāditya Prakāsh, Professor of Architecture, University of Washington, Seattle. 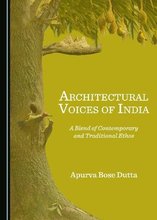 Architectural Voices of India: A Blend of Contemporary and Traditional Ethos
Buy now
Buy from
amazon.com