✕
Save
Porocity: Opening up Solidity
Share
Or
Copy

An exciting new manifesto from the Why Factory, Porocity: Opening Up Solidity makes a case for the intervention of the public realm into the private sphere of the city. The Why Factory raises a critique of the city as excessively closed off, and offers tools for the prying open and aerating of the city in such a way that is socially, environmentally and economically valuable to its citizens. How can we introduce pockets for encounters, for streams of circulation, for green areas, for tunnels of cooling? What structures can be imagined to allow for this openness? Creating grottos? Splitting towers? Twisting blocks? More than hypotheses, models and examples (as useful as these are), this book even proposes such tools as a computational means of calculating the degree of porosity of architecture, so that urban thinkers and urban doers can turn the critique upon their own cities. 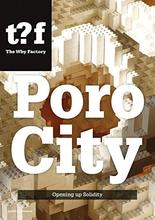