GARDEN CITY MEGA CITY: Rethinking Cities for the Age of Global Warming is a wake-up call; it is a plea for urgent action to rethink, re-plan and remediate the world’s mega cities. The relentless growth of these cities is ravaging our environment and our planet.

WOHA—in collaboration with writer and photographer Patrick Bingham-Hall— propose an alternative to the continuing implementation of unsustainable 20th century urban planning models. By using WOHA’s mini-city projects and proposals as prototypes – energy-efficient vertical landscapes with sky villages and sky parks – the book presents a compelling manifesto for densely settled, yet comprehensively green, and ultimately sufficient, cities of the future.

Inspired by the Garden City movement of the early 20th century, GARDEN CITY MEGA CITY responds to the alarming urban crisis that now threatens all large cities around the globe, and urges the universal reinstatement of a mutually beneficial coexistence between human beings and the natural environment. WOHA’s projects prioritize the re-creation of ecosystems, and have also reintegrated public space and civic culture within the increasingly unpleasant urban fabric of our overcrowded cities. WOHA’s scalable prototypes o er a radical model for mega city planning: not just for the newly massive cities of Asia, but for other such cities around the world. “If mega cities are to avoid potentially terminal dysfunction,” writes Bingham-Hall, “such thinking— whereby environmental prerequisites and human philosophies go hand in hand—is imperative.”

With a two-sided, tête-bêche format, one half of the book articulates the problems facing cities in a time of climate change and rapid population growth. Striking photography portrays the depressing realities of the mega cities, such as Mumbai, Manila, Jakarta, and Delhi. The other half of the book explains WOHA’s architectural and planning solutions, which are extensively illustrated with renderings, axonometric drawings, and photographs of completed schemes.

As a practical method for assessing the quality of ‘high-rise high-amenity’ living, GARDEN CITY MEGA CITY includes a Rating Cities guide, which uses social and ecological criteria rather than economic viability to assess the value of urban construction. The Green Plot Ratio, Community Plot Ratio, Civic Generosity Index, Sufficiency Index, and Ecosystem Contribution Index, constitute five means of measuring the effectiveness of a building development’s performance in terms of sustainability and sociability. 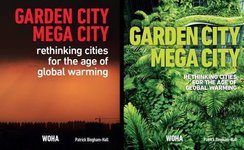