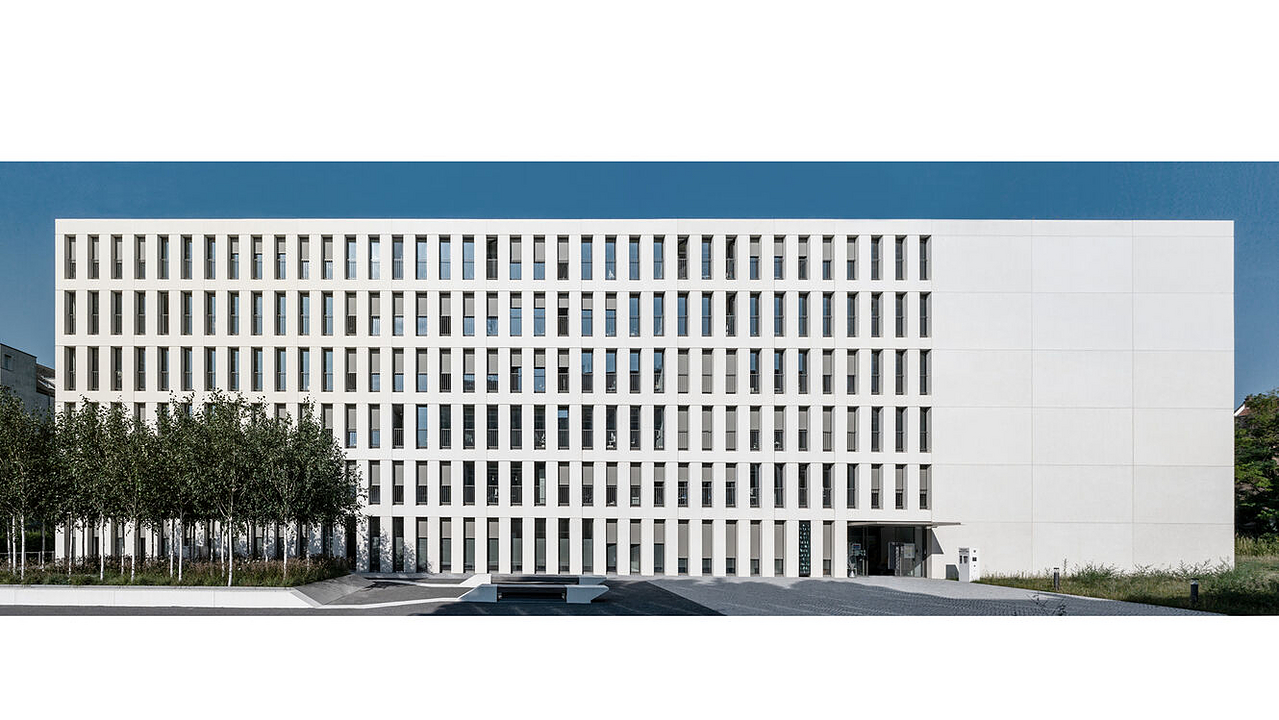 The State of Baden-Württemberg built the administrative building for the Karlsruhe City Tax Office with a façade made up of 350 precast concrete parts. The concrete sandwich façade construction with integrated core insulation is connected with Schöck's Isolink.

The individual components feature different designs with two to four shafts that, when they assembled together, constitute a façade unit. In order to create an organized and precise façade, the highest quality exposed concrete was needed. Each of the precast components was sandblasted in the precasting plant. This created a special texture on the surface with a uniform overall surface appearance.

The inner surface of the façade structure was designed as a load-bearing panel and insulated with mineral wool. The window geometry with deep reveals required the use of insulation panels that were 35 centimeters thick. The large overhangs had to be taken into account in the reinforcement.

The major static and structural challenge in securing the outer shell panel was selecting an anchor system that could handle the weight of the façade. The construction contractor chose Schöck's Isolink type C since it provided a force-transmitting connection of the outer shell panel to the inner concrete shell panel and, at the same time, ensured the thermal decoupling of the concrete façade. The insulated connecting component Isolink, which is approved by DIBt, consists of Combar, a fiberglass composite material developed by Schöck, which is characterized by a particularly high tensile strength and therefore a high load capacity.

In addition to its good static properties, Isolink is a certified passive house component and thus excels in its thermal insulating properties: With a thermal conductivity of 0.7 W/(m*K), Combar conducts almost no heat (compared to the conductivity of stainless steel 15 W/(m*K). Therefore, it can keep thermal bridges and the resulting risks of heat loss and structural damage to a minimum. In addition to providing secure fastening, Isolink also ensures that the installed façade elements on the new Karlsruhe tax office building do not act as thermal bridges and are highly energy efficient.