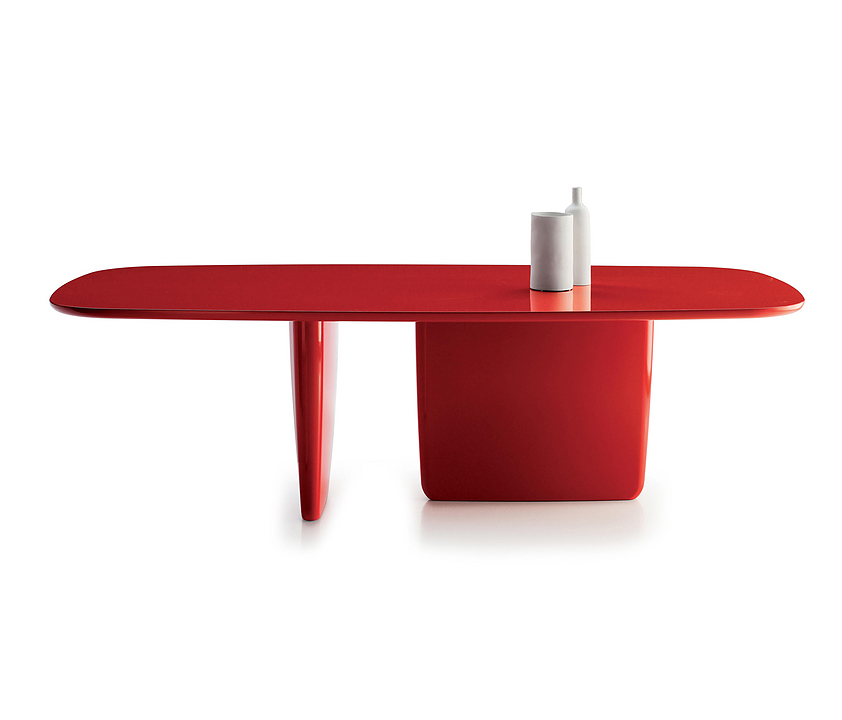 As the designers of the 2012 Olympic torch, they have already had their creations collected in an important monograph. Edward Barber & Jay Osgerby debut for B&B Italia with Tobi-Ishi, a round table that was based on a commission by the company to complete the table range.

The fascinating result required a complex study of proportion and equilibrium. Its inspiration from the East is clear even in the name, which refers to the ornamental stones used in traditional Japanese gardens. The British duo was influenced by the compositional balance of these striking and elegant green spaces. The form of the table, which is distinguished by the cantilever top and bases that look different depending on the perspective, alludes to those smooth stones. With unexpected materials, it blends technology and handicraft.

After considerable experimentation aimed at creating a granite look, today the table bases have cores in Baydur ® (structural polyurethane foam) and a wooden top. All the parts have been treated with cement grout to create a sort of superficial skin that recalls a history of high-tech craftsmen.

Several acknowledgments from critics and the media have shown interest in this product. Today, the Tobi-Ishi table revels in a new identity after being presented first in cement, then in London and New York in two contrasting marbles, white Carrara and black Marquinia. Here it is presented in two very different colors: a decisively bold Candy Red and a quieter, contemplative Smoke Blue. As it changes its finishes, Tobi-Ishi reminds us of its oriental roots through the glossy, almost mirror-finish lacquer. Its shapes seem softer, the bright colors make it eccentric and the blue makes it sophisticated without losing its iconic personality.

The shape has impressed both the public and the press, has broken away from the traditional round table placed on central support, and has created an element of surprise with its finishes. Now it expands its functional features by proposing itself in a rectangular version, first in the dining version, presented last January in Cologne with a new range of sixteen satin-finished colors and now in the low version, only available in oak in four different finishes: light, grey, black and smoked. A choice created to highlight the natural handcrafted appearance of a multipurpose table without sharp corners that, with its rounded shapes, is extremely practical when placed in front of a sofa.