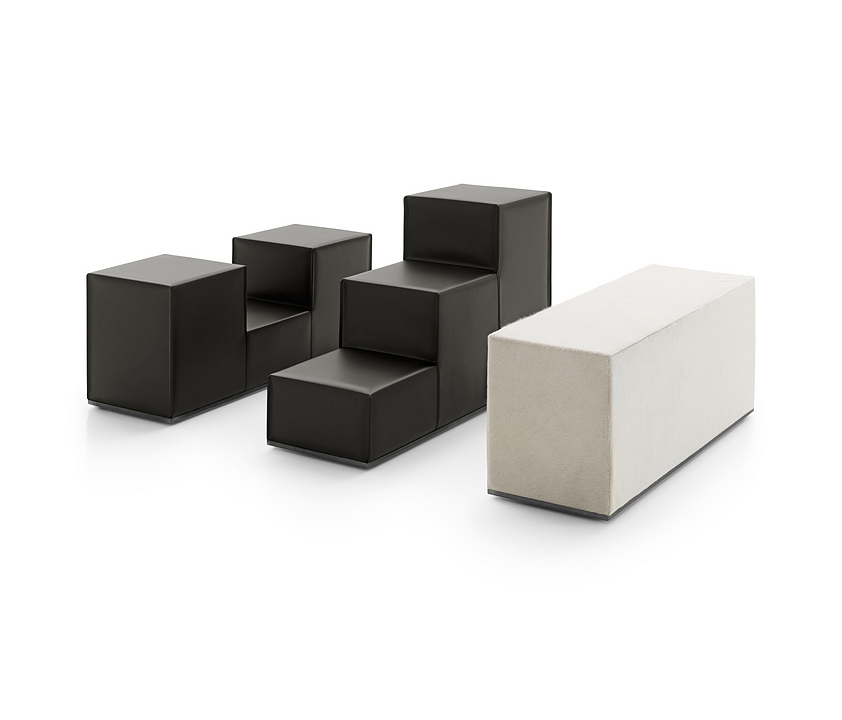 The flexible nature of Camaleonda continues and is completed by Gli Scacchi, the chess pieces, a series of accessories designed by Mario Bellini to become additional tables or seats. The three pieces that make up the series are inspired by the game of chess, in particular the queen, the knight, and the rook (hence the Italian names Regina, Cavallo, Torre), light and easy to move like on a chessboard.

In the 1971’s original version, Gli Scacchi represented a remarkable technical innovation as they were produced in self-skinning polyurethane foam, a solution which was initially used only by the automotive industry and introduced for the first time in furniture. The 2020 reissue offers soft covers made of thick leather and calf hide with visible stitching. The system designed in 1970, makes its comeback 50 years later, speaking a contemporary language, between structural solutions and sustainable choices.

The shape of the three elements elaborates on and develops the parallelepipedon, through structures made of soft polyurethane that perfectly synchronize with the dimensions of the Camaleonda. At the base there is an elegant metallic profile, an element that defines the geometry of the shape in contrast, with the softness of the object.

The history: 50 years that have not gone by
Presented to the public in 1970, Camaleonda has passed through 5 decades of design history as a true icon. It is constantly featured in most international design museums and in the film-sets that have defined the collective imagination. An object that is loved by design aficionados, antique dealers, and interior decorators alike is finally back in production after a careful design process that involved the close collaboration between the B&B Italia’s Research & Development Centre and Mario Bellini.

Mario Bellini’s work is characterized by bringing together design and architecture and Camaleonda testifies to his unique ability to move confidently between diverse design languages, between macro and micro, geometry and curves, artificial and natural materials.

The present: a contemporary reissue
In its reissue, Camaleonda preserves the elements that have made it a contemporary classic. By mutual agreement, Mario Bellini and B&B Italia have decided to keep the 90x90 cm seat module, together with the backrest and the armrest, faithful to the original project, whose original cutting pattern was used for the new edition.

The generous polyurethane padding that forms the characteristic capitonné design remains unchanged, still manufactured with the innovative system of cables, hooks, and rings created by Bellini in 1970, which defines the characteristic look and modularity. Thanks to the tie-rods and the rings, in fact, the modules can be unhooked and recombined at will, allowing the sofa to adapt to an evolving taste and the dynamic needs of those using it.

The fundamental characteristic of Camaleonda is its unlimited modularity, a geometric pattern that allows each element to become a sort of enormous pixel through which to define your home environment. By hooking and unhooking seats, backrests, and armrests, you can enjoy the luxury of changing your mind as many times as you desire, moving and redesigning the space.

The padding has been thoroughly updated by the B&B Italia’s Research & Development Centre, making it even more comfortable than the original version. Thus the magical balance between the rigorous geometry of the square and the welcoming roundness of the padding is confirmed, further underlining the elasticity and tactile ergonomics that characterize many of Mario Bellini’s design projects. Camaleonda can be upholstered with B&B Italia’s entire textile and leather collection, allowing for another variable in the multitude of possible combinations.

Camaleonda is a dynamic, alive, and sincere object, not at all enigmatic, that allows for an infinite number of configurations while still maintaining its peculiar and unique identity.

The future: sustainability and circularity
The re-edition of the Camaleonda does not look back to the past, but on the contrary, it aims to rewrite an indisputable classic in a contemporary perspective.

Aesthetics, dimensions, proportions, and the way it is configured remain unchanged, while the composition of the interior has been completely redesigned with no room for nostalgia.

The “sandwich” structure of Camaleonda is made up of recycled or recyclable materials that can be easily disassembled. The seat, backrest, and armrests, and bases are made of wooden panels. The sofa rests on the floor on a series of spherical feet made of FSC (Forest Stewardship Council) certified beech wood.

The padding of the seat, the backrests, and the armrests are made of polyurethane in various levels of density and firmness. The highest degree of complexity lies in the seat, where elements are shaped and assembled to allow every layer to interact, at the same time guaranteeing a high level of comfort. The various layers generate empty spaces or pockets designed to create a comfortable spring effect. The engineering and composition of the seat allow the interior elements of the sofa to be disassembled and therefore easily recyclable.

The padding is protected by a removable cover made of Dacron, a synthetic fabric that is entirely made of recycled PET, the same material used to manufacture plastic water bottles.