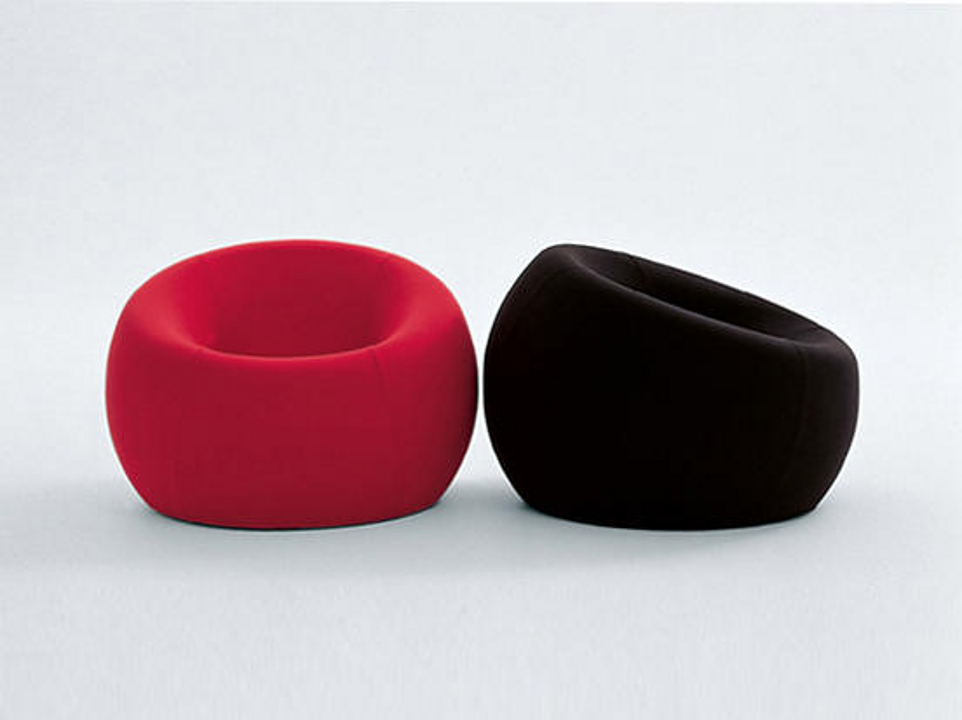 The Up series of anthropomorphic seats, among which the Up 5_6 is world renown, came about in 1969 through the collaboration of C&B Italia (the company from which B&B Italia evolved) and Gaetano Pesce. The meeting between artist and industry had already been announced by two projects the year before: Yeti, a padded monolithic armchair, and Vela (meaning sail) which was an expression of Pesce's constant search for an innovative yet formal style.

With the Up series, from one side Gaetano Pesce brought his own personal idea of the woman to light. “I was telling a personal story about my notion of women: despite themselves, women have always been prisoners of their own making. Along these lines, I liked the idea of giving this armchair a feminine shape with a ball and chain, the traditional image of the prisoner.”

On the other side was a company which, having a great deal of technological know-how for product development, brought Pesce’s idea to life and transformed it into a piece of modern art available to a broad range of people. Out of this, a series of seats arose, seven to be exact: timeless furnishings expressing a universal idea, created with the foremost advancements in development and technology.

Updated and reproduced by B&B Italia in 2000 with high performance materials, today these chairs are amongst the products that best represent the company's long path towards innovation.

In polyurethane foam and upholstered in stretch fabric, the chairs were initially vacuum packed, with a reduction in volume of 90%: the “expanding” effect once they came into contact with the air was as unique, spectacular and expressive of the style and technical pairing that set this product apart. Today, vacuum packing has been replaced by further research on materials, making it possible to use longer-lasting elements.

Famed among design collections, exhibited in international museums, and recently in the new exhibit by Antonio Citterio in the Museum of Design at the Milan Triennale, the Up series today celebrates its 40th birthday. This birthday is the chance to present the Up5_6 armchair with a new silver upholstery, personalized with a serial number.

This pop-culture furniture piece expresses all the unabashed energy of the Sixties, as well as a new technology and a provoking philosophy on women's conditions. The Up5_6 armchair, a timeless icon of Italian design, is still full of all that special energy of 40 years ago.

up5_6, an unrivalled icon of Italian design on the international stage, now presented in an unusual version designed for children aged over 3 years: upj. the new junior version,which is identical to the original except for being smaller in size, is proposed as a designarmchair both comfortable and playful; its attractive shape and its bright red colourwill tastefully furnish and enhance spaces dedicated to children and even compactmetropolitan apartments. upj, the latest “must” for all those who will not give up a seat -even a small one - that has a place in design history.