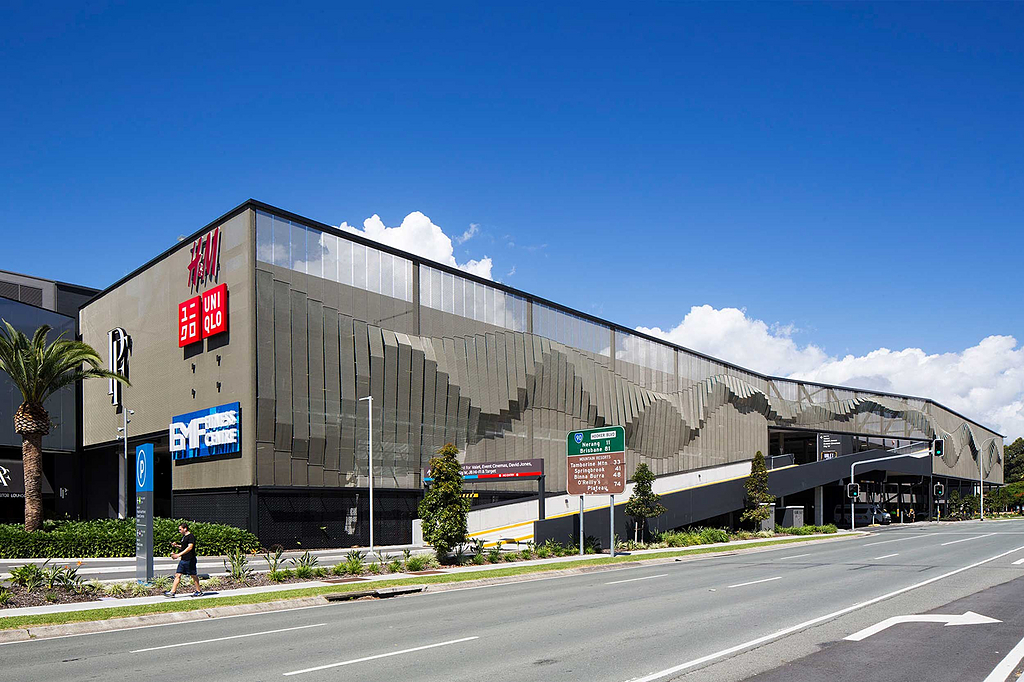 Kaynemaile architectural mesh was used to create an architectural statement for Pacific Fair Parking Garage. The design was done by Scentre Group who had initially planned a rigid metal panel. It soon became apparent that the traditional rigid material lacked the fluidity the designers needed. Additionally, the requirement for a substantial sub-frame to support a metal panel-based system had increased the project costs significantly.

One of the unique characteristics of Kaynemaile is that it can be made to any dimensions in one seamless piece (thanks to its patented manufacturing process) – this meant it easily worked with the pre-determined structural frame heights and gave the designers the flexibility they needed to explore new concepts.

In the sub-tropical climate of Australias Gold Coast, using a material that cut heat but maintained airflow was crucial. Kaynemaile significantly reduces both radiant heat through direct sunlight (EMR) and thermal conductive heat from entering the interior of a building by up to 75%. This made it possible to let daylight in and manage the passive solar gain—all while maintaining visual transparency.

With Scentre Group encouraged by the early material tests, the Kaynemaile fabrication team quickly created prototypes for review making it easy to progress the design. This collaborative approach extended into the detailing phase as Kaynemaile developed a unique fixing system to work with the design, giving on-site adjustability and allowing for easy installation and maintenance over time.

The inspiration for the three-dimensional facade came from the waves and golden sand of the nearby Pacific Ocean. Two layers of architectural mesh, provide changes from day to night along the busy boulevard with a series of vertical strips with stepped projecting depths which combine to form the large wave pattern.

Although each vertical strip has different projecting dimensions they were all designed and fabricated with all the mounting cables and Kaynemaile mesh joined together as a strip ready to go out of the box. This meant the strips could be installed easily at any point along the facade as other works on site were continuing. This dramatically cut the install time and labor required, significantly reducing costs.

The main facade also features a seamless single-piece Kaynemaile Obsidian Black colored flat-screen measuring 50 meters (164 feet) wide by 9 meters (29-1/2 feet) high. This screen was lifted and fixed off in a day by hand without the need for site cranes or specialized lifting equipment.