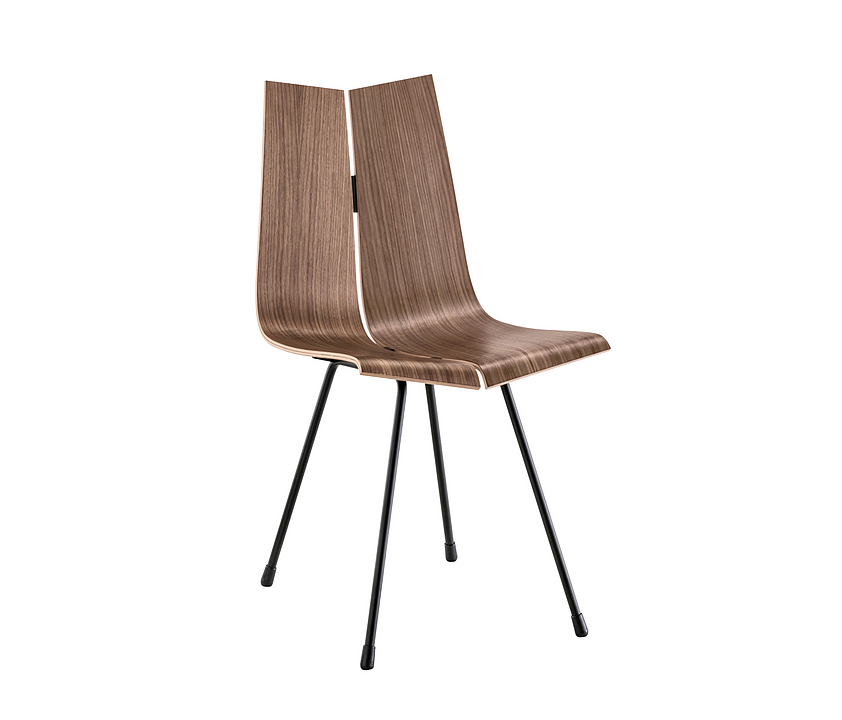 One becomes two and two become one: This is, in simple terms, is the principle of the ga stuhl plywood chairs. Its two shells make it a unique and innovative 50s design. Swiss architect and designer Hans Bellmann devised the chair in 1955 and horgenglarus produced it until 1970. Now Switzerland's oldest manufacturer of chairs and tables has updated the innovative ga stuhl.

In the same way, as he designed the einpunktstuhl four years earlier, Hans Bellmann experimented with molded plywood and fathomed the manufacturing options for seat shells when designing the ga stuhl. He wanted the two-dimensional shell to have an extra dimension. This idea was the starting point for his new design.

Bellmann used a wider shell, split it in the middle, and then re-joined the two parts, but not so they were parallel to each other, but rather slightly off-set. It was a unique approach in those days, modern manufacturing methods for shaping and bending seat shells were still unknown. Bellmann used a little trick to achieve his objective: He re-joined the two parts at a slight angle, creating his planned third dimension from the different cutting angles. While the shell is not really bent three-dimensionally, it gains an extra layer from the construction used. Therefore, the ga stuhl was often called the two-shell chair.

Bellmann devised and sketched every single piece himself: Retention screws, rubber supports or rubber boots for the legs. He developed an entire ga program, available in horgenglarus’ product line in the 50s and 60s: Versions with or without armrests, easy to stack or not, as a rocking chair with wooden runners, with a removable fabric cover or as a revolving office chair with height adjustment.

For the national Swiss Expo in 1964 in Lausanne, Geneva architect Marc j. Saugey furnished the entire Ticino restaurant with the ga stuhl. The model was also used in the classrooms of the Luftmatt girls’ school in Basel, Switzerland, as can be gleaned from the 1965 horgenglarus catalog. In 1956, the ga stuhl was awarded “Die gute Form” by the Swiss Association of Workmen.

For the ga, Bellmann remained true to his construction principle: He preferred no-frills and practicality. For the einpunktstuhl he used a single screw, for the ga it was two: To join the halved seat shell of the ga stuhl, a small metal plate is used on the back and two metal plates are used on the underside. The steel tube underframe is then attached using two screws. The ga stuhl is available in black walnut or beech, in a natural, black, or stained finish, with a black matte metal underframe. It is 40 cm wide, 53 cm deep and 81 cm high; seat height is 46 cm.

Why is the chair called ga? According to Rosemarie Bellmann, Hans Bellmann’s widow, his original design was meant to be used in the garden.