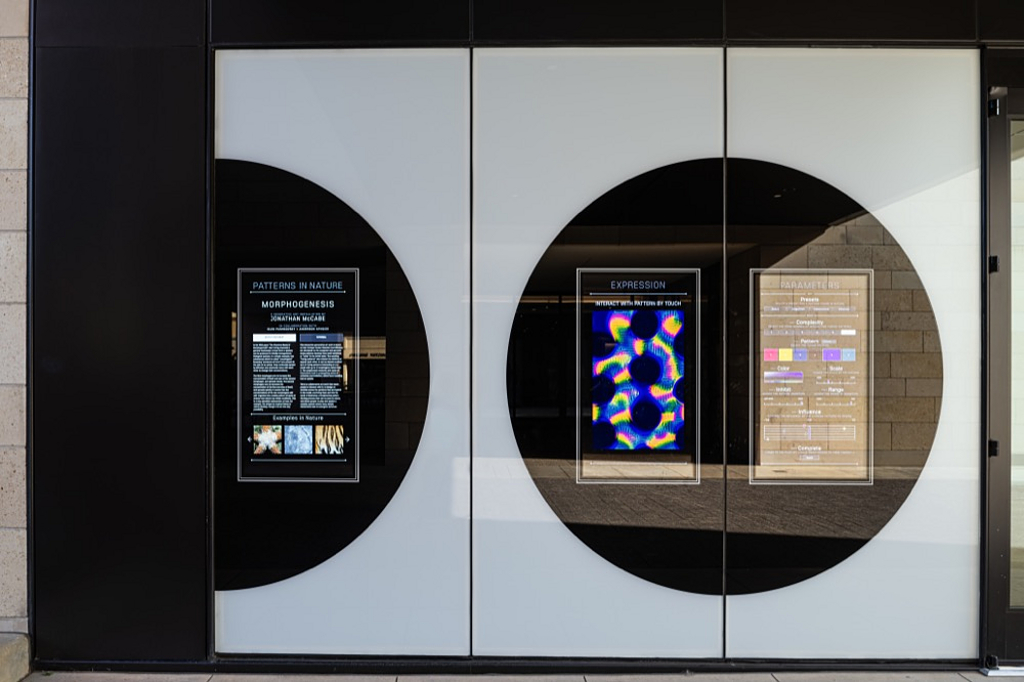 The Anne T. and Robert M. Bass Biology Research Building at Stanford University is a biology faculty that unites students that were once spread across campus in one five-story structure. After completion of the building, Stanford hired Knot to add a new design layer to crown the new building, especially given its high-profile location. Knot was tasked with telling stories of science in a non-literal, abstract way and were given broad artistic license to explore multiple themes and variations.

The designers created an interactive public art piece called Morphogenesis that used GKD Metal Fabrics' proprietary product, Mediamesh. Morphogenesis is the first installation that connects user interaction with a large-scale media mesh platform. Users of Morphogenesis interact with a generative algorithm by manipulating parameters via a touchscreen at the building’s main entrance. The patterns created are projected onto the permanent art piece displayed.

Mediamesh is a stainless steel mesh from GKD interwoven with LED lights. Easily installed over any building surface, it is ideal for large scale applications and can cover four times the surface area of traditional media displays with as much as 80% less electricity. With up to 60% transparency, the mesh still allows for natural daylighting.

Seismic issues prevented the mesh from being placed on the exterior of the building, instead, the team hung the media facade between large glass panels located just inside the building envelope.

While the project ran smoothly, it was not without its inherent challenges including safety, installation logistics and the intricacies of its functions. Engineering the interactive interface to control a 32-foot tall Mediamesh was no easy task. Morphogenesis functions using custom-coded touch sensors that integrate hardware and software for user interaction with a kiosk that serves as a visual synthesizer to create an infinite variety of moving patterns and colors.

Visibility was carefully analyzed to take into account the viewing angles of the display and customize where the LEDs are targeted to ensure the impact of the display is at optimal brightness. Accounting for the glass in this particular case required a careful calculation of brightness to the outside as well as reflection level into the room behind it.