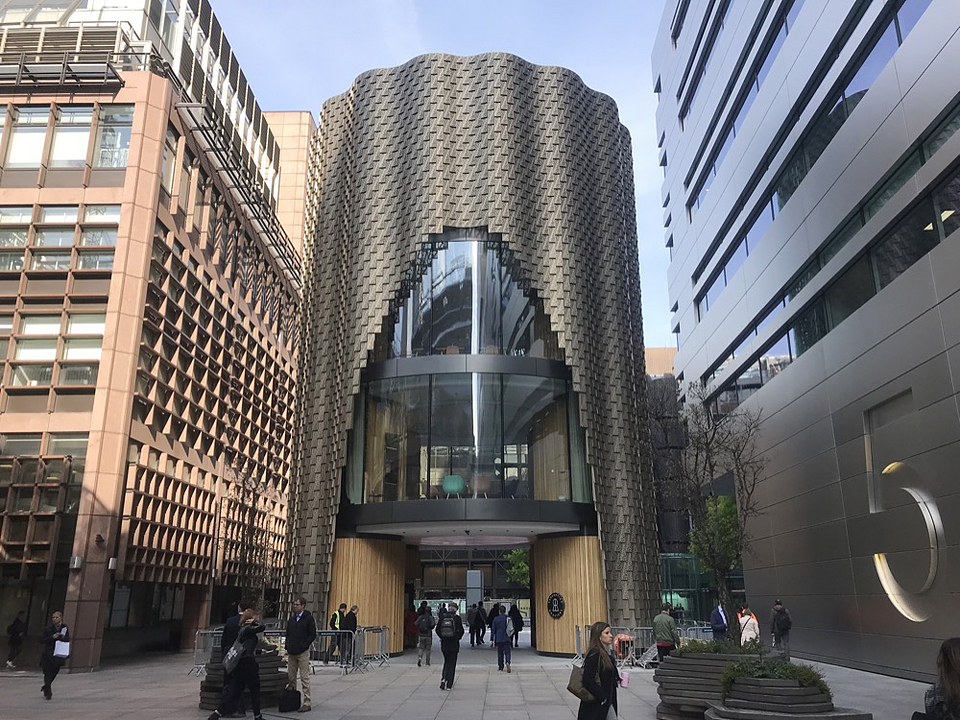 The redesign of a 1980s office pavilion in London features metal façade cladding from POHL. 3 Broadgate is a 19-meter high cylinder in London's financial district. The original pedestrian passageway on the ground floor was rarely used, the new one by Orms Architects London impresses as a large archway with a shimmering metal shell and a new identity.

3 Broadgate was built alongside a large number of large buildings that were built in the City of London during the financial boom of the 1980s. British architect Peter Foggo designed 1-2, 3, and 5 Broadgate as a cohesive office complex with a pink granite façade and a post-modern appearance. Some of the other buildings of the urban cluster have been or are now undergoing their own redesign projects.

Broadgate is a popular connection for pedestrians to Liverpool Street and Moorgate with around 30,000 people using the route every day although only a few choosing to walk through the building. The top priority for the redesign was therefore to dissolve the perception of the building as a barrier. At ground level, the building needed to be open to encourage pedestrians to travel through.

Orms removed the suspended ceiling, increasing the height of the passage from three to four meters. In addition, the previously ramp-like passage was smoothed. A new curtain façade optically forms an archway over the entire height of the three floors, loosening up the narrow spaces between 5 and 1-2 Broadgate and providing an exciting new path for the Londoners. The new coffee shop inside the arch adds an incentive for the way through the building.

When designing the façade, Orms looked to Broadgate's historic past. London's urban area used to be used as a "Tenter Ground", where newly produced cloths were stretched to dry, so the design team developed the idea of small rectangular overlapping tiles that wrap themselves around the building in a wave. This idea went through a few iterations; from movable tiles to terracotta and finally, the much lighter version made of metal. The Cologne-based facade system manufacturer POHL presented an aluminum shingle that visually reflects the idea of the lightness of fabric panels and is light in itself. A square hole pattern creates additional permeability. 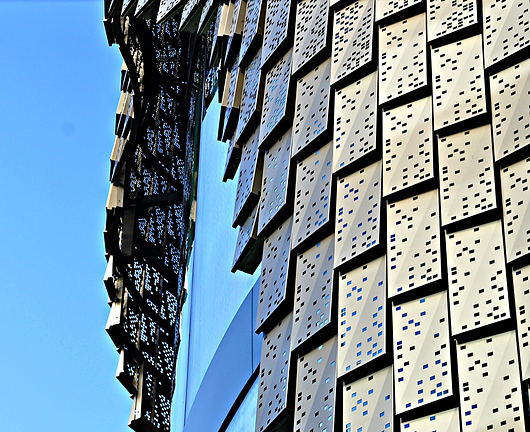 5,425 shingles in three sizes up to a maximum of 500 x 350 mm are individually visible to underline the independence and more human dimension of the pavilion in contrast to the neighboring buildings. Orms chose anodizing, a particularly low-maintenance and durable surface solution. In contrast to a powder coating, anodizing transforms the top layer of the aluminum by anodic oxidation into a protective layer with a matt to silky shine and extreme durability. A further advantage is that, since the metal is surface-finished without additional paint application, it can be completely returned to the raw material cycle.

POHL provided samples from a wide variety of anodized colors and Orms opted for a warm, dazzling bronze concrete (POHL Duranize® Bronze). In 2018, 740 m2 of shingles were produced at POHL Facade Division's Cologne site and shipped to London.