Glued laminated timber can be used to span large widths easily however it comes with limits. When it comes to overseas projects or narrow construction site access roads, glulam reaches its limit. This is where HESS LIMITLESS comes in, it has been used by HESS TIMBER for over ten years to realize projects and is a specifically developed, patented and approved all-in-one solution.

HESS LIMITLESS are specially pre-fabricated on HESS TIMBER's site in the form of arbitrarily long glued laminated timber beams which are then subdivided into short, convenient segments. Segmenting the beams makes them easy to transport worldwide in a safe and economical fashion.

Once on-site, experienced assembly specialists glue the subsegments using the patented HESS LIMITLESS joint system and prepare them for assembly. 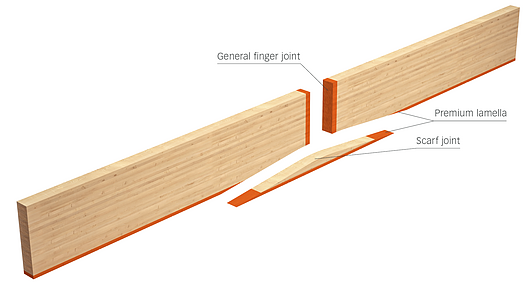 The unique degree of effectiveness [η = 1] of the pure wood-wood connection results from the optimal interaction of the general finger joint and the scarf joint. The scarf joint is a specially designed fitting piece with an angular cut on both sides and which, depending on the load case, is applied either on the upper or bottom side of the glued laminated timber construction part.

Both the subsegments and the scarf joint are equipped with specially sorted premium lamellas on the side that is under tensile load. The ingenious combination of the different components lessens the strength reduction of the general finger joint and enables the realization of highly economical and optimally dimensioned glued laminated timber constructions.

Combining the construction parts leads to theoretically endless possibilities for length with a high technical performance capacity and the benefit of transportability. HESS LIMITLESS is planned by HESS TIMBER engineers according to the individual requirements of the project leading to an effective all-in-one solution for wide-span supporting structures and highly-stressed constructions worldwide.