The renovation of Hamilton Hill Home was an exceptional feat due to unusually restrictive time constraints. Renovating an existing building in 96 hours is not easy even with imagination, construction knowledge and a talented team of tradies, decorators and landscape gardeners. The ugly 1970s brick and tile dwelling was given a fresh modern look to turn it into a contemporary family home by a pair of experienced renovators who know all the tricks of the trade and used Stria cladding for the façade from James Hardie.

Situated on a substantial level block, the single-story Hamilton Hill house has four bedrooms, two bathrooms, and formal and informal living rooms. Although lacking in style, it had more than enough space for the family who had called it home for the previous decade.

Renovated by Matt & Kim of Channel 9’s Matt and Kim to the Rescue; the middle-aged masonry house was dragged forward 45 years by the duo with a proven a track record for turning ugly ducklings into swans at double speed. The project made the most of the home’s solid bones, spacious interior and the sizeable yard was a priority.

The design of the new home included a new standalone external art studio that opens onto the expansive outdoor entertainment area with a pergola and fire pit with seating for 20. The dated kitchen and bathrooms were replaced and a facelift given to the internal and external living spaces created a seamless ‘flow’ between the indoors and out. The dated light brick exterior was transformed using Stria cladding from James Hardie.

Rendering has become a default choice for renovating typical tired all-brick façades and the technique can be seen throughout Australia. Matt and Kim updated this technique with the addition of Stria 325mm cladding to the front façade of the home, creating a beautiful mixed façade finish. In addition to a full wrap of the main house, Stria was used to clad the newly built art studio. 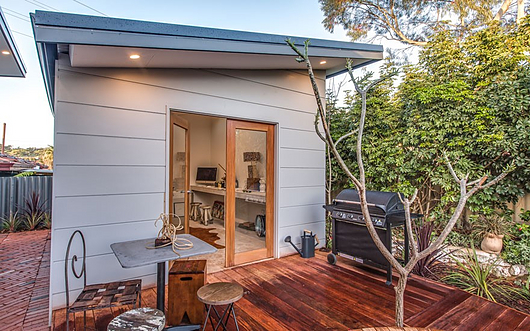 An external cladding product with a horizontal ‘ship-lapped’ joint, Stria 325 is pre-primed, easy to install, and well suited to achieving a classic look. The cladding panels are a popular choice for full-wrap constructions and renovations, upper and ground-level extensions and internal feature walls.

Faced with a four-day project window, using materials that allowed a fast build time was imperative, which is why the cladding from James Hardie was an easy solution. Unlike rendering, Stria can be installed even in bad weather and so won't affect the build time in temperamental conditions. Renovators with more time on for their builds can also enjoy significant savings from selecting a concrete based cladding solution over other façade alternatives.