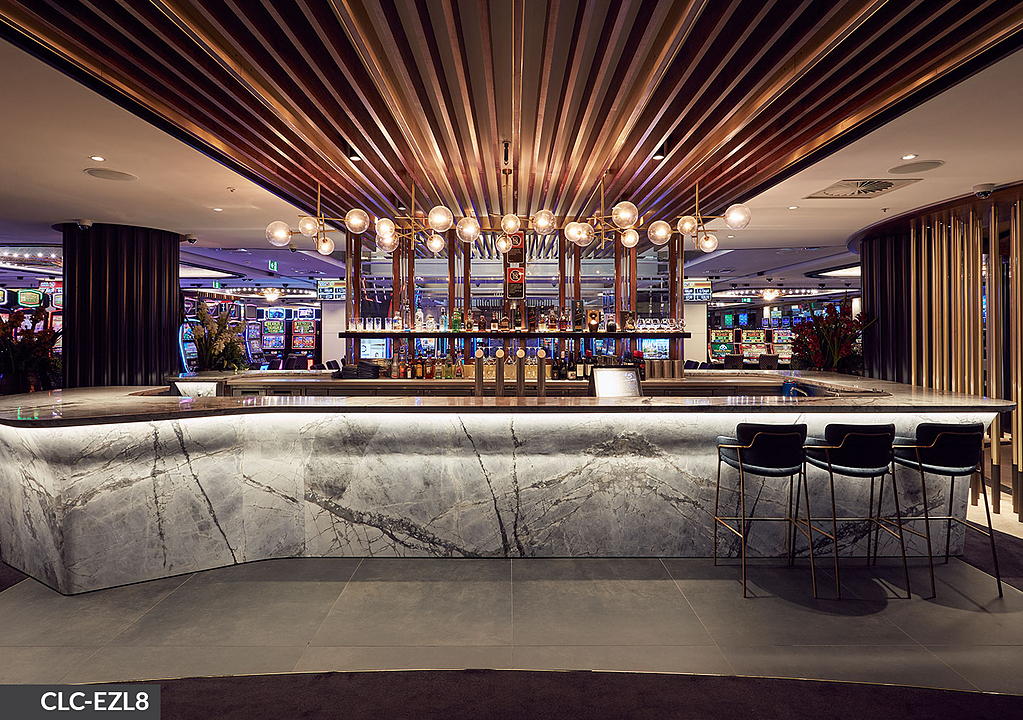 Canterbury Leagues Club is one of Sydney’s premier hospitality destinations with 5-star amenities including restaurants, coffee shops, multiple bars, and entertainment lounges and a 24-hour health club. The Canterbury Leagues Club underwent significant refurbishment, extensions, and renovations through a staged development process across an 18-month period, concluding in January 2019.

Aglo Systems’ Custom Design and Manufacture team have been involved in the concept ideation and fabrication process of numerous hospitality light features across three tender packages. Each custom-designed piece is the result of a collaborative effort between Aglo, FPOV lighting designers and Altis Architecture, both based in Sydney.

The B-PL6B Pavilion Pendant is located in the Bakehouse Café. Aglo received the purchased order in August 2016 and it was delivered to the site and installed in December 2016, a 5-month long process. This pendant underwent many design changes that were developed using 3D modeling and rendering programs. The pendant is made from various aluminum machining processes which all have been electroplated in brushed dark brass. The pendant is illuminated by 12 low voltage G4 LED lamps which are covered by an ice crystal glass sphere.

The DPL8 ceiling mounted light feature is also situated within the Bakehouse Café. Ten of these can light are installed in a row parallel to the exterior window. The design fabrication incorporates both steel and glassworks. The glass is blown and shaped specially to suit the steelwork. A dark bronze finish is applied to the metalwork. This feature has two light sources; an LED module placed in its center for downward light and an LED strip placed around the top surface to illuminate the ceiling.

DPL4 is the third type of pendant located at the Bakehouse Café, with six separate fittings featured in the space. The main body is established by a 550mm diameter smoked orange, hand-blown glass shape with a contrasting dark brass finish framework. A decorative filament LED bulb illuminates this pendant. A purchase order for this feature was processed in March 2016, and with multiple design phases, we achieved a September 2016 delivery.

DPL3 is one of two corridor feature lights that the Aglo team helped manufacture. For this piece, Aglo supplied the 200mm diameter frosted glass sphere that attaches to the vertical beam. This sphere is illuminated by an E14 lamp, with eight spheres supplied in total.

The DPL5 pendant is the other corridor light feature that was supplied by Aglo’s custom design and manufacturing team. This pendant is a 100mm diameter cylinder that is almost 1.5m in length. It is suspended from decorative rods, with a brushed aluminum body in a dark brass finish and an opal acrylic cylinder base. Notable features are the polished brass decorative rings and the walnut timber end caps. A single strip of LED tape illuminates this pendant evenly across the whole surface. This feature like many others in this stage of the club’s revamp was delivered to the site in September of 2016 ready for installation.

The DPL1 Banquette Chandelier is a simple bent tube light, which is arranged in a semi-circle around a pole. This arrangement uses one individual tube design and places 13 of them together to create an interesting feature. DPL1 is manufactured by mandrel bending a steel tube at both ends. A custom made spinning was also manufactured to conceal the lamp holder. The feature was finished with an antique dark brass electroplate. The feature is fixed to the ceiling with a canopy, which conceals the power cable at one end and then wire suspended on the other. A single E27 light bulb illuminates each tube section. A challenging aspect for the manufacturing process was getting a clean and neat bend with a consistent tube diameter during bending, which was eventually solved after many trials. With multiple reviews and design iterations, this part of the project also ran for a six-month duration.

The DWL1 architectural light fitting is a wall light for the lounge area. This feature consists of three mandrel bent and welded tubes which were polished and then electroplated in a brushed dark brass finish. An eye turning feature is the laser cut and rolled decorative mesh placed in front of the three E27 LED lamps. Four of these fittings were supplied for the room.

A total of nine Main Gaming Chandelier CLC-EZL2 features were installed across the entire gaming floor ceiling. Each feature spanned 2.8 meters in diameter and a height of 600mm. This feature consists of 40 bent tubes at a diameter of 2.8 meters with a second layer of smaller 40 bent tubes in-between the first layer at a diameter of 1.7meters. The outer layer of tubes is illuminated with a single LED lamp in each tube. The feature is finished in stunning polished gold. The tubes all bend up together to create a tube column in the center of the feature which is revealed with the illumination of 8x E27 Globes.

This feature was delivered and assembled on-site in several pieces due to its size and the delicate nature of the material and finish. During installation, each feature needed to be winched up and maneuvered around to avoid the sprinkler systems which were situated in the middle of each feature. In total to install all nine features, it took one Aglo Engineer, three separate trips to Sydney over 6 months, with the help of local Electricians R.W.Palmer.

The Gaming Cashier Pendant CLC – EZL7 is featured directly in front of the cashier desk. It consists of three different diameter rings hung at varying heights. Each ring is illuminated in a different direction of either upward, sideways or downward light, with an opal acrylic diffuser. The finish to these rings was changed from its original specification to solve fabrication issues and the result looks fantastic in an Onyx Pearl gloss finish.

The Column Wall Lights EWL1 was the first of the renovation stage four custom luminaires to be installed. There was a total of 39 wall lights that are spread across the entire gaming floor on both columns and walls. The wall light is illuminated both up and down creating an effective directional light, adding an effect to the interior gold finish. The exterior gloss black finish is sophisticated and elegant.

The Pod Seating Chandelier CLC-EZL5 is situated just off the bar in the gaming floor area. The feature is made up of two separate chandeliers that are conjoined to create a dynamic offset of two different heights. These chandeliers are a larger version of the bar pendants, being a cluster of both 6 spheres and 12 spheres joined together. Each sphere is illuminated from the end of the connecting polished brass structure. The structure is welded and polished together to create a seamless crisscross effect.

The Bar Pendant CLC-EZL8 is a collection of five separate fittings spread across the length of the bar. Each pendant had four clear glass spheres that were illuminated from the end of the connecting polished brass structure.

The result of the 18-month long project is a fantastic collection of high-class bespoke luminaires which add depth and drama to each space.

Unique Luminaires for Nineteen at The Star

Cocoweb
✕
Thank you for your interest in this product! Maybe you'd like to request a quote for these similar products?
Get a Quote