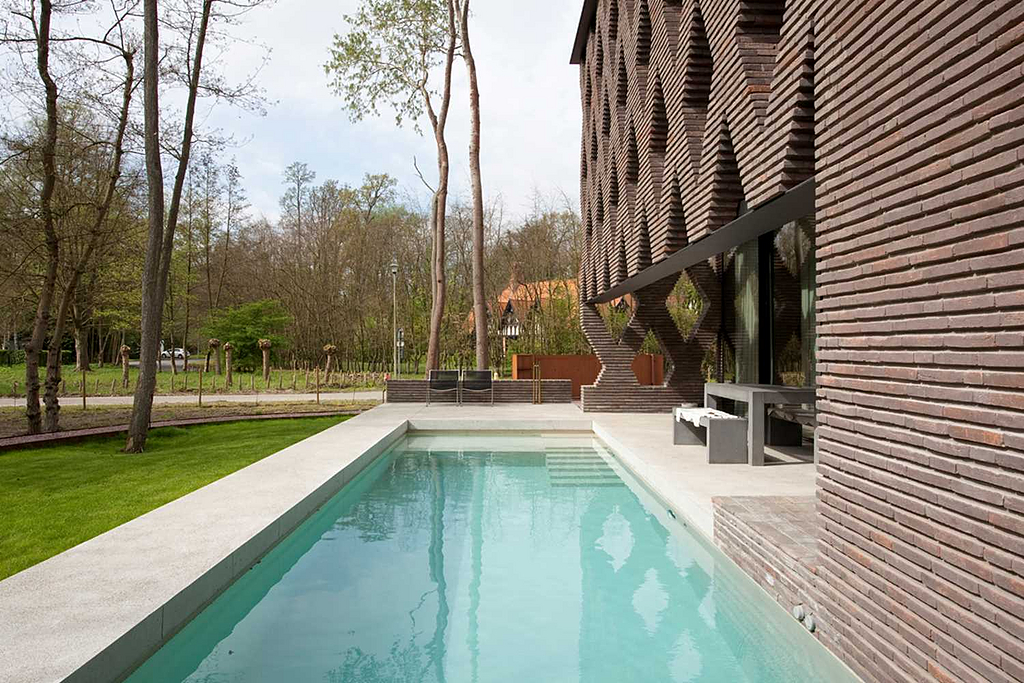 Facing bricks from Vande Moortel are used to create the brick façade of this villa in Kampenhout, Flemish Brabant. The lush surroundings include valuable indigenous trees and a brook prone to flooding. Due to these challenges, the architect decided to position the house and path higher than the road and build the villa in-between the trees.

The villa was designed as an elongated volume between the trees, precisely oriented at an angle so that the living spaces and the swimming pool would get as much sun as possible. An overhang was created on that side of the villa in order to shield the living spaces and bedrooms from direct sunlight.

The villa has a unique visual language created by the architects' design which lays the facing bricks in a magnified claustra bond with chequerboard pattern. This design language was made possible thanks to the stackability of the facing bricks which enabled a solid construction to be built that would let in sufficient light.

The horizontality of the house is emphasized by the brickwork which has a broad horizontal joint, with the sides being butted up to each other with no vertical joints. Around the villa, the thickness of the joint was carefully calculated and determined, as a result of which all the horizontal lines flow into each other perfectly. In the process, particular attention was paid to the window apertures and the steps.

In order to create the desired uniform and solid visual image, the Hand-Made linea 3007 was also used for the finishing of the steps and the wall capping. This veined brick with natural shading met the preset requirements for both shape and color: The length of the Vande Moortel facing brick emphasizes the horizontal linear finish of the house and the brown-red shaded color fits in perfectly with the wooded environment and the oak and black steel exterior joinery.

Vande Moortel
✕
Thank you for your interest in this product! Maybe you'd like to request a quote for these similar products?
Get a Quote