A Centor sliding door was used to bring in natural daylight and create a seamless connection between the interior and garden in a ground floor extension. Homeowners Amaresh and Neerali required a family-friendly living space following the arrival of their first child.

Following the birth of their first son, it quickly became clear that they would need more space to cater to the requirements of family life. Amaresh felt that a sense of space in the home was important for a child and the volume was a major factor in choosing a property. The house they chose was a detached, modern build with the scope to extend into the south-facing back garden. The potential to create the space they wanted was immediately clear.

Originally there was an open-plan living and dining area at the back of the house, but the kitchen was separate at the front. Amaresh and Neerali were keen to have an open-plan zone that included a kitchen more focused towards the garden. They also wanted to make the most of the southerly aspect, so the design was created with lots of glazing. London-based architect Paul Archer Design was brought on board to handle the design for the project.

Having used them on past projects, architect Robert recommended Centor’s Integrated Doors as a solution to help the couple achieve the unbroken transition they wanted between inside and out. The couple visited Centor’s stand at a self-build exhibition to see whether the sliding doors would be a good fit for their project. they were pleased with the look and feel of the product, and the fact that there was an integrated blind to make things simpler and neater.

Now the extension is complete, the couple is delighted with the results. “It’s a great space where everyone can be without getting in each other’s way,” says Neerali. “It works for us in so many ways. We each have our own space, and it’s really nice for entertaining, too.” The glazed features, including the glass box aspect and the Centor Integrated Sliding Door, are one of the pair’s favorite elements. The slim door frames work particularly well, as there are no chunky vertical surrounds to obscure views of the outdoor space. 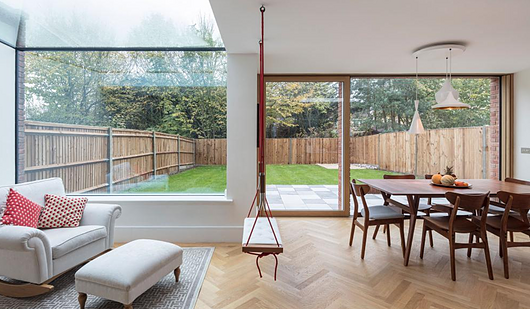 The Integrated Doors feature a built-in shade, which comes in very handy since the south-facing orientation of the house means the living area receives a lot of sun. In the morning, shading reduces the glare of low sunlight and keeps the house cool. The doors also incorporate integrated insect screens to prevent bugs from flying into the house when the entrance is open which is useful in summer when insects are prevalent, yet a breeze is still welcome.