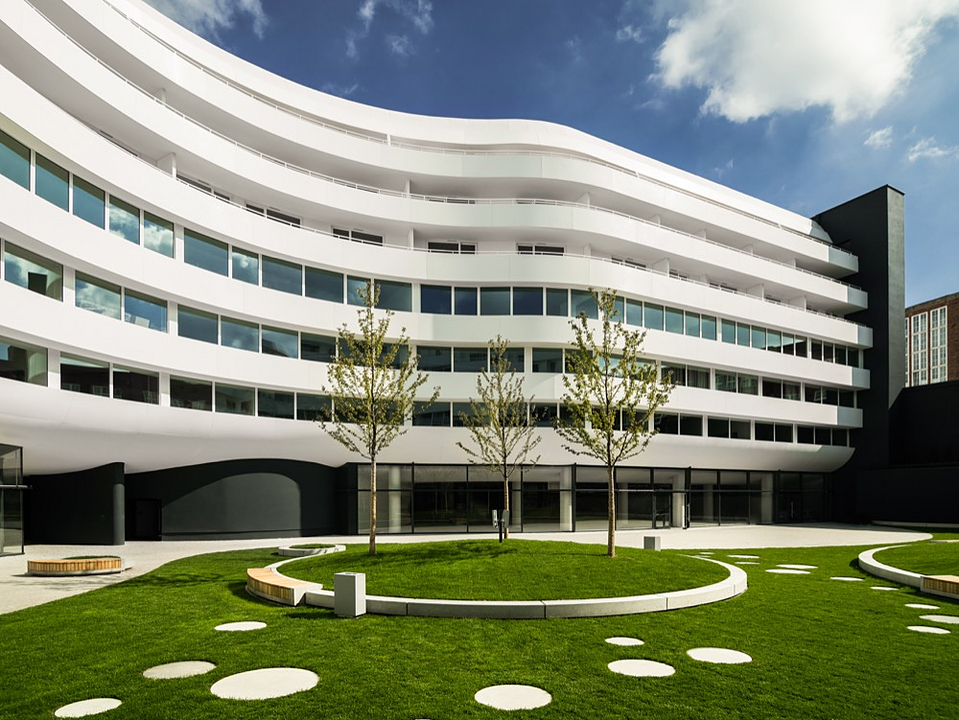 OVO Wroclaw with DuPont™ Corian® cladding is said to be a milestone in urban architecture. The ultra-modern complex spans 50,000m2 in Wroclaw, Poland’s fifth-largest city. Designed by Gottesman-Szmelcman Architecture, with JSK Architekci as executive architects, the building is located near the historic market square and features an inspiring rounded façade made with DuPont™ Corian® high-tech surface in white.

The architects were struck by the incredible diversity and plurality that is inherent in the architecture of the site. The sleek white structure is now a part of Wroclaw’s evolving urban landscape. Wroclaw, a business city on the banks of the Odra River, offers a variety of architecture and is the ideal setting for the OVO Wroclaw to make a significant statement. Gottesman-Szmelcman Architecture’s concept focused on layering the building in such a way that it reflects the complexity and richness of urban life.

The plot where the OVO Wroclaw stands proved a big design challenge. There is an existing post office made of bricks on one side and major thoroughfares on the other two, which means major car traffic and significant emissions. Thanks to the easy to clean, non-porous surface of DuPont™ Corian®, the façade will remain pristine and if anything happens to the curves on the façade, it can be mended on-site without having to dismantle it.

6,000m2 of Corian® wraps around corporate offices, 180 luxury residences and a five-star DoubleTree by Hilton hotel with 189 rooms and suites and offers a majestic view for visitors to its sprawling inner courtyard. Corian® was used for making the DoubleTree by Hilton backlit logo and in a variety of other interior applications in the hotel, including an elegant welcome area at the reception, backlit signage of individual apartments, bathroom worksurfaces.

As the site is highly congested with guests coming and going, it must withstand a great deal of traffic while still maintaining a clean appearance over a long period of time. That is why Corian® in Glacier White – the same that appears on the façade – was a perfect choice for interiors since no dirt or bacteria appear on its surface. Corian® was also used for wall cladding in conference rooms and bathroom countertops, proving how versatile the cladding material can be as a design tool.

Asaf Gottesman describes the process by which the architects developed conceptual guidelines; inspired by the pluralism and diversity of Wroclaw, they chose to underline a dialogue that celebrates contrast rather than mirroring:

The amorphous design that was envisioned required alternative building techniques in order to be realized. DuPont™ Corian® was pre-treated during production. The material was then transported to the A&B Consulting firm, which fabricated the facade panels into the desired shape through panel thermoforming techniques. When the form cooled down it was subjected to a final treatment process – milling each piece using a 5D plotter. Corian® was then assembled in a way so that all the elements are undetectable.

How to Attach Heavy Panels with Hidden Fixings

Facade and Roofing in Croix Nivert

Corian® Exteriors
✕
Thank you for your interest in this product! Maybe you'd like to request a quote for these similar products?
Get a Quote