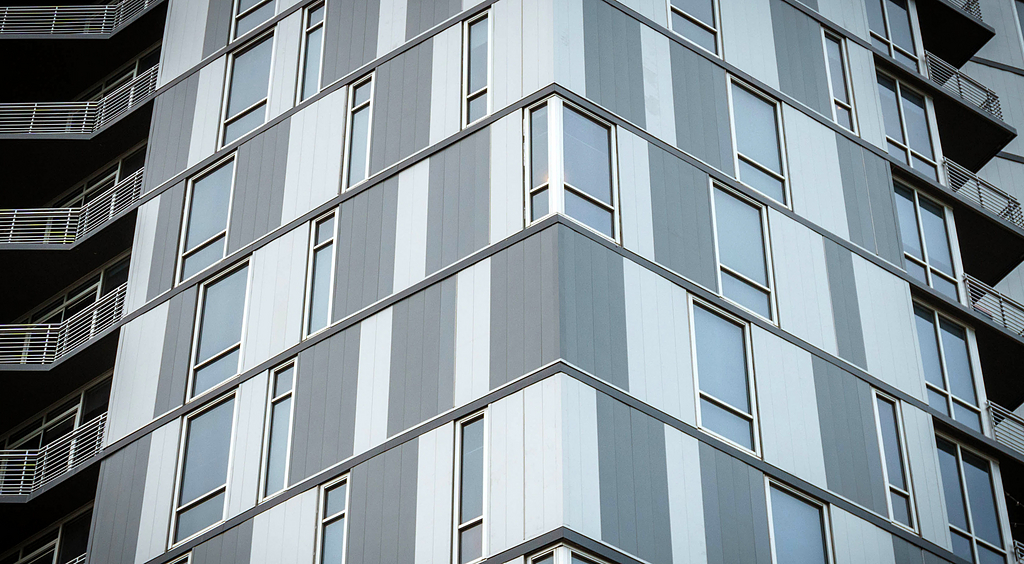 Confluence tower is clad in Morin metal facade panels in two tones to give it the appearance of fluidity and to withstand the high wind load placed on the high-rise. The tower is a new ultra-luxury high-rise residential building sitting on a tightly zoned piece of land between a river and a creek. It soars 375 feet into the skies of Denver, Colorado. Named after its location; Confluence Park, the metal-clad tower was completed in the late summer of 2017.

At the base of the 35-story tower, is a 4-story building with residences connected to a 6-story structure which houses further apartments. Each of these buildings utilizes various building materials like glass and masonry and metal wall panels from #MorinCorp.

The tower’s historical location has many advantages. The park is filled with bike trails, pedestrian paths, trees, and grassy areas. As the tallest residential building in Denver, it has some of the best views of the mile-high city. There were also challenges that came with the 52,000-square-foot piece of land. The restrictive zoning lines meant that only 10,000 of those square feet could be used for the tower. Soon after ground was broken in 2014, the builders encountered coal tar. Also, being sandwiched between two rivers meant dealing with head pressures of groundwater on the foundation 3 levels underground.

Confluence’s lead architect and founder of GDA Architects, Charles Gromatzky, used the location challenges to inspire the building’s design. The demarcation lines cutting across the site were used to dictate the shape of the tower which the architects shaped into soft curves within those spaces to soften it and mimic the curves of the nearby rivers.

The flowing shape gives the feeling of movement and change as travel around the tower. The views change from every angle. The fluidity is helped by the use of two tones of Morin metal facade cladding panels in bright silver and blueish weathered zing used randomly to mimic falling water. To enhance this effect, programmable LED lights run along the edge of the building light up at night.

Over 5,000 square feet of Morin's F-12 metal wall panel was used for the project. The architectural panels are made of 18 gauge galvalume steel. They were installed vertically with a negative pressure clip designed to withstand high wind loads. This design combined with the heavy-duty panels is essential for a building 35 stories high in a mile-high city.

Sustainability was a huge factor for the architects. Morin architectural panels are produced with sustainable metals and are LEED-certified so they satisfied their commitment to achieving LEED Gold Certification for the tower.

Morin Corp.
✕
Thank you for your interest in this product! Maybe you'd like to request a quote for these similar products?
Get a Quote