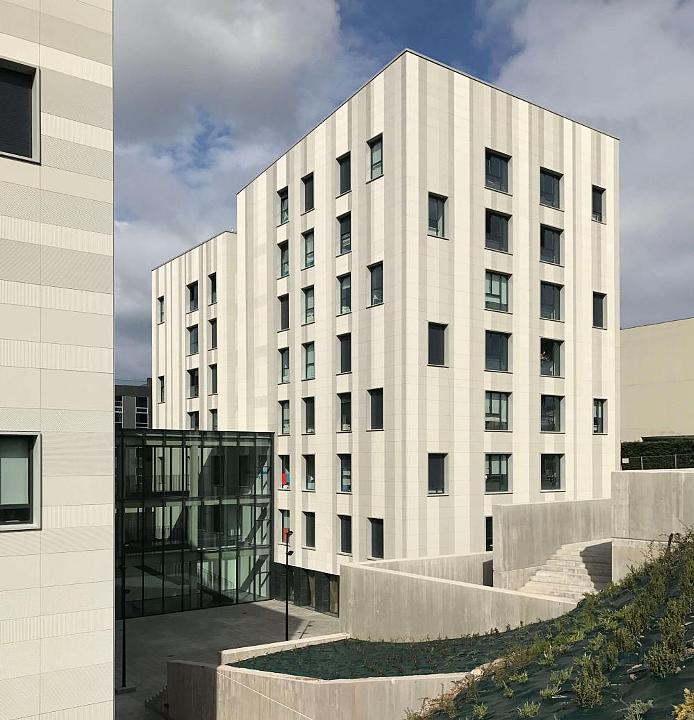 Along with architect Carlos Galiano, ULMA has participated in a project for a new Uneatlantico university residence in Spain. Composed of two buildings of four and six floors respectively, linked by a large walkway, this residence has a total of 340 beds divided into 70 studios and 42 apartments.

The collaboration of the technical team from ULMA with the architect responsible for the work, Carlos Galiano has been vital to giving an answer to the initial approach of the project and the needs of the property regarding the delivery time of the building, simplifying the manufacturing and assembly process thanks to mutual collaboration in decision making.

Along with architect Carlos Galiano, ULMA has participated in a project for a new Uneatlantico university residence in Spain. The ventilated facade system uses water facade panels.

The project architect, Carlos Galiano was working for the first time with polymer concrete for facades. He was allegedly surprised by the firmness and solidarity of the material. The panels provide multiple finish and color options and stability against the effects of weathering.

Two textures from the VANGUARD range by ULMA have been used.

The spectacular optical effect generated by the water texture recreates the illusion of having different tonalities in the same color. In fact, it is a unique texture that achieves the effect of different shades thanks to the ‘waves’ oriented in different directions (vertical, horizontal and diagonal) and thanks to the effect produced by the sun when it hits the texture. By simply changing the layout of the façade panels, the building gains dynamism, since, depending on the quality and incidence of sunlight on the façade different effects are produced.

The architect used ULMA panels and customized them to include specific and personalized perforation designs in both panels. The staircase, therefore, becomes a microclimate revolving around the natural light which shines through without changing the composition of the facade.

The installation system used by ULMA adapted to the needs of the project; The use of a hidden fixing system that does not use any visible screw or rivet is a great advantage. the ULMA system is based on a system of primary and secondary profiles of extruded aluminum where the plate is held by a slit in the lower and upper face that allows the fixation to be completely hidden.

ULMA’s ventilated facade system helps reduce the bioclimatic needs of the building because the ventilated chamber avoids thermal bridges and functions as an insulating and protective air chamber. Condensation problems are also avoided which helps the thermal-hygrometric behavior of the building. This leads to several advantages: