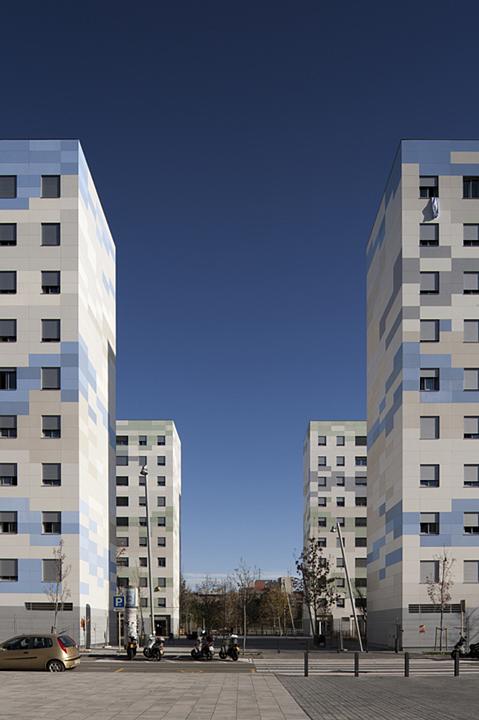 Four housing blocks have been renovated in the Barcelonian town of Cornellá de Llobregat in Fontsanta plaza. The project was a social initiative by the city council of Cornellà through PROCORNELLA, a municipal company for the social, urban and economic promotion of Cornellà, with the purpose of providing improvements in the area.

The climate enjoyed by the Mediterranean Sea is famous however this proves problematic for buildings during summer months due to heat accumulation. To remedy this, ULMA has contributed to the project with its Ventilated Façade system featuring Air facade panels.

ULMA’s Air facade panel system helps reduce the bioclimatic needs of the building because the ventilated chamber provided in the construction system avoids thermal bridges and functions as an insulating and protective air chamber. Condensation problems are also avoided which helps the thermal-hygrometric behavior of the building. This leads to several advantages:

The architect J.A Marín Sánchez has also contributed to energy efficiency in the project by the intelligent choice of light colors. The clearer the colors of a building, the lower the absorption of heat tends to be. Color choice has achieved a contemporary aesthetic as well as a facade that repels radiation.

The equity achieved by the renovation of the building image by the installation of ULMA Air facade panel system brings a second value on top of the greater thermal and acoustic comfort it provides. The property becomes more highly valued in the short term and in the long-term assists with running cost savings.

Polymer concrete affords major advantages when undertaking facade restoration: the lightness, flexibility, and adjustability at the works site of the material allows a wide range of adaptations to be carried out, applying sheets in different formats. What's more, there is the possibility of installing the ventilated facade without the need to remove the current covering.

The renovation scale was of considerable dimensions yet was carried out in only 8 months, fulfilling all deadlines. All work took place on the outside of the building, for the convenience of the owners.