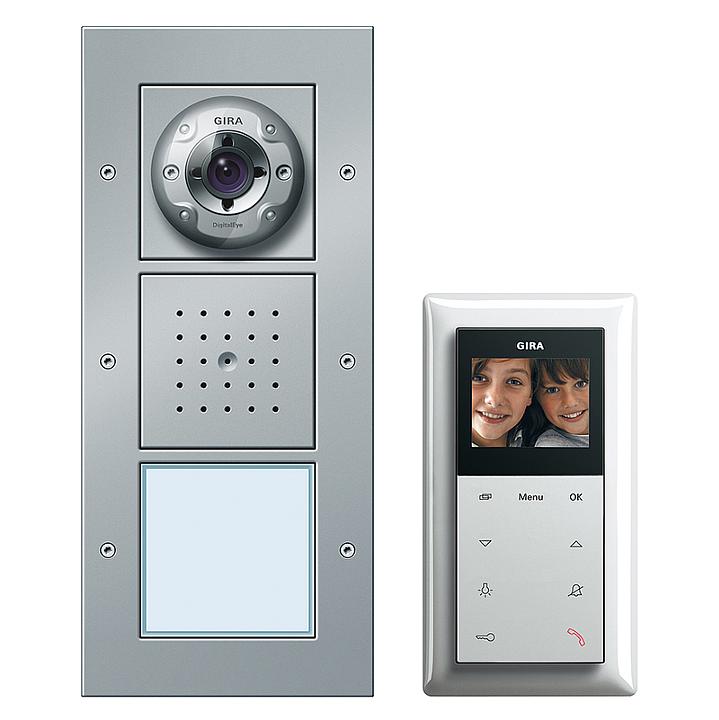 Gira home stations are the voice and operating units at the front door and the counterparts to the door station outside. The Gira surface-mounted home station video Plus has a homogeneous front and features a state-of-the-art color display. Thanks to its capacitive sensor technology, it can be conveniently operated by lightly touching the buttons. To ensure greater operating reliability, internal calls and switching actions can be provided with individual names. The hands-free speech function is so sensitive that the speaker does not have to stand directly in front of the microphone to be understood.

INTEGRATION:
Integration into the Gira design lines facilitates the uniform appearance of the door communication system and electrical installation. Available for the Gira Standard 55, E2, Event, Esprit, ClassiX, and E22 design lines, as well as the F100 design line. If desired, the home station can also be installed without the frame.

DISPLAY:
The state-of-the-art 5.6 cm [2.2"] TFT color display offers good visibility from various angles of vision and a high depth of focus, especially when visitors are standing a little further away from the door. In addition to this, system settings can be made via an on-screen display, similarly to the way they are set on televisions. The display is activated automatically as soon as someone rings the doorbell, but can also be switched to manual operation.

OPERATING BUTTONS:
A special feature of the Gira surface-mounted home station video Plus is its homogeneous front with the integrated operating buttons. The operating buttons feature capacitive sensor technology and react to the slightest touch.

SPEAKER AND CONNECTABLE MICROPHONE:
The intercom unit is equipped with an echo suppressor. The microphone is automatically activated at the location where the level is higher. If ambient noise at the front door is particularly high, the person at the home station can activate the microphone with an override function by pressing a button.

AUTOMATIC DOOR OPENING AND CALL ACCEPTANCE:
Both these features are optionally enabled by the electrician and can then be activated via the menu. The functions are very convenient, e.g. for medical practices, and enable doors to be opened automatically as well as speaking or listening directly in a room, e.g. from the reception to the doctor's consulting room and vice versa.

LOCAL IMAGE MEMORY:
Depending on the settings, up to three images are taken and saved whenever the doorbell is rung. This allows you to see who was at the door after periods of absence. If desired, images can also be recorded manually during a conversation.

CARD SLOT FOR MICRO SD:
Up to ten customized polyphone ringtones can be saved on the integrated microSD card. During installation, the microSD card is inserted at the rear of the unit so as not to disturb the harmonious appearance.

INSTALLATION:
The Gira surface-mounted home station video Plus can be easily installed in two steps:

GIRA
✕
Thank you for your interest in this product! Maybe you'd like to request a quote for these similar products?
Get a Quote