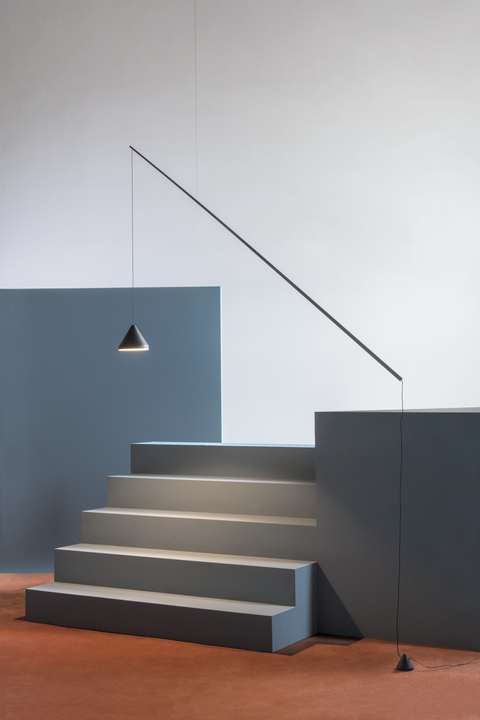 Designed by Arik Levy for Vibia, the North lamp collection was inspired by differences in the angle and intensity of sunlight as the seasons change. A striking composition of geometric forms, its simple silhouette is at once elegant and whimsical. Triangular shades hang from elongated carbon arms that protrude in various directions from their heavily anchored base, recalling a stylized fishing rod.

True to its namesake, the LED-powered North generates a gentle yet uniform light. Rather than overwhelm a space, its ambient glow is localized, defining an area with a focused pool of light. The base and the source of the light are displaced, separated in space from one another providing unexpected lighting effects. North generates a uniform light with a localized character that is flexible, provided where it is needed.

Consisting of a traditional hanging shade suspended from an elongated carbon-fiber rod or arm which this lamp can be attached to a wall, ceiling or a mobile heavy base. North allows for multiple arms to be combined together arranged at different angles to provide a localized luminous effect where required.

Vibia
✕
Thank you for your interest in this product! Maybe you'd like to request a quote for these similar products?
Get a Quote