Columbia University has been at the forefront of medical education for more than two centuries, as it was the first medical school in the United States to award the M.D. degree in 1770. Now, the Columbia University Medical Center (CUMC) has announced plans for a new, state-of-the-art medical and graduate education building that reflects how they believe medicine is and should be taught, learned and practiced in the 21st century.

Located on the CUMC campus in the Washington Heights community of Northern Manhattan, the 14-story facility will aim to achieve LEED Gold certification and incorporate technologically advanced classrooms, collaboration spaces, and a modern simulation center. The design is led by Diller Scofidio + Renfro, in collaboration with Gensler as executive architect.

Continue after the break for more details! 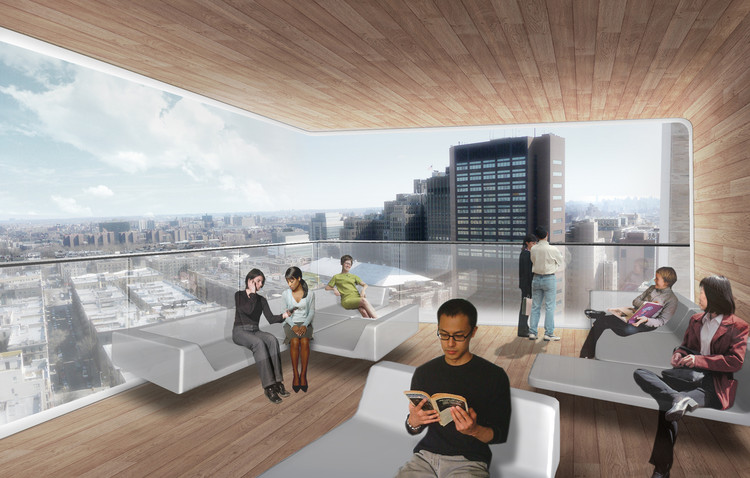 Usually, architecture photographers are architects themselves, but today we want to show show the work of Israeli photographer Erieta Attali, an actual photographer who started working related to archeology and science, and then got involved with architecture after working throughout Japan covering this country`s Contemporary Glass Architecture.

SOM breaks ground at The Christ Hospital in Cincinnati

Skidmore Owings & Merrill (SOM) has started construction on their 1.4 million-square-foot master plan for The Christ Hospital in Cincinnati, Ohio. Demolition will commence on the existing parking garage at the south end of the hospital complex in order to clear the way for the new Orthopedic and Spine Center (OSC). The contemporary 332,000 square-foot building draws on the predominantly red brick character of the existing buildings and surrounding historic Mt. Auburn neighborhood, while providing a new public face on the south side of the hospital.

SOM strives to achieve LEED certification after completion in mid-2015. Continue after the break to learn more. 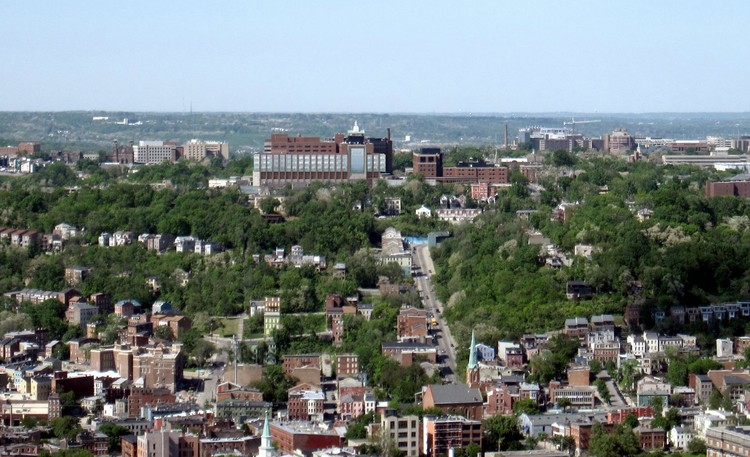 Wallpaper magazine recently announced their 2012 Architects Directory which features some of the world’s most intriguing young practices that have made their way into the spotlight. More images and a complete list of the architects who made director can be viewed after the break.

The first film of George Lucas is without any doubt a master piece in terms of how to represent futuristic spaces. In THX 1138 the underground spaces are absolutely controlled. People’s behavior is driven by different drugs depending on the physical effect required. The movie contained a catalogue of spatial experiences and explore new forms of spaces that are many years forward the ’70 ideas.

We invite you to enjoy this magnificent film and let us know your comments below!

EE&K, a Perkins Eastman Company, and Knutson Construction were recently selected by Hennepin County for their design for ‘The Interchange’ in Downtown Minneapolis. The design-build contract for the $79.3 million transportation hub, which is expected to be completed by 2014, will connect transit with culture. Led by architect Peter Cavaluzzi FAIA, the multidisciplinary team envisions a state-of-the-art transit station with complementary mixed-used development and year-round activated public space. More images and architects’ description after the break.

The second prize winning vision for the Urban Redevelopment Project at Tainan Main Station Area responds to the extending aim of positioning Taiwan in general, and Tainan city in particular, as a major historical based tourism destination. Designed by Maxthreads, their strategy attempts to contribute to Taiwan’s economic diversification from its current infrastructure lead planning system. More images and architects’ description after the break.

Built after winning an international landscape competition at Ponte Lima, Portugal, Honey Scape is temporary landscape pavilion by Gonçalo Castro Henriques of X-REF. This installation intends to shelter the visitor, captivating him by a dream-like atmosphere with aromatic plants. This atmosphere is defined by a light and transparent structure, based on a honeycomb, creating a dynamic of light and color throughout the day. More images and architects’ description after the break.

Dominique Perrault Architecture, the French practice recently awarded with the opportunity to build a tower called The Blade in Seoul as part of Daniel Libeskind’s master plan, has now been announced as winner of a concept/construction international competition for the Esplanade Tower in downtown Fribourg, Switzerland. The high rise is part of regeneration project of the Swiss Federal Railways at the site of the former Pilettes Station.

We are near to the 85, ooo photos in our Flickr Pool, so keep them coming! Remember you can submit your own photo here, and don’t forget to follow us through Twitter and our Facebook Fan Page to find many more features.

The main photo was taken by pov_steve in Mexico City, Mexico. Check the other four photos after the break.

In a call for a Sustainable New York City, Mayor Bloomberg stated: “Given that buildings account for more than 80 percent of all municipal greenhouse gas emissions, constructing buildings with energy-efficient features is essential to reducing those emissions, and DDC plays a critically important role in that work.”

This is a great idea for new construction, but what about the existing, aging buildings? Most older buildings were built in a time when energy costs were low and the exterior walls were used less for energy performance and more for structural integrity. Knocking these buildings down to start over would cause a greater environmental impact due to the tons of waste material that would need to be discarded. So, what is the solution? REskin. DesignByMany‘s challenges you to cleverly reskin a decaying urban building on the corner of Broadway and Reade St in New York City. Submissions can range from a focused investigation to an entire reskinning of the building.

The REskin challenge is sponsored by Autodesk and media partners ArchDaily. Winners will receive a full license of Autodesk Revit Architecture 2013. Check out the building and learn more after the break!

The AIA’s Home Design Trends Survey for the first quarter of 2012 reports an optimistic outlook for residential architectural firms. Key aspects of the survey attempt to illustrate the trending situations compared with previous quarterly surveys. Perhaps the most enlightening aspect prevalent throughout the majority of the survey topics is that growth is beginning to shake off the declines of the housing downturn. More details after the break.

Giveaway: Ten copies of 'How to Make a Japanese House'

Thanks to the courtesy of NAi Publishers, we are giving you the chance to win this great book: How to Make a Japanese House (see our review here). We have 10 copies of the book and all you have to do to participate is become a registered user (if you’re not one already) and answer the following question in our comments:

Archipelago Mobile, a master plan proposal by Kyung Jae Kim, Gregory Haley, Suah Na, Heejoo Shi, and Halley Tsai, attempts to address and enhance the city of Helsinki. Known as a city ‘in-between’, their design envisions a revitalized South Harbor district, configured to mediate between land and water uses, resident and tourist amenities, port traffic and pedestrian space. By weaving these often competing requirements together in ways that not only allow but enhance their co-existence, they present an integrated model for postindustrial waterfront development in general, and a unique vision for a dynamic cultural district in the heart of the city. More images and architects’ description after the break.

CLOG is currently seeking submissions for its fifth issue, CLOG: National Mall, which will be published in November 2012. In an election year when America is debating and deciding its trajectory, it’s time to critically discuss the space that perhaps more than any other reflects what the nation was, is, and wants to be – the National Mall. Visited annually by approximately thirty million people, the Mall is also a victim of its own success as its grounds and monuments have been steadily eroded by overcrowding in addition to budgetary and administrative pressures. Submissions are due on July 20, 2012 by midnight. For more information, please visit their website here.

Today marks the opening of world-renowned architect, Santiago Calatrava’s unprecedented exhibition at the State Hermitage Museum in St. Petersburg, Russia. Not only will Calatrava become the first contemporary architect to have a retrospective exhibition at the Hermitage, but this will also be one of his largest and most extensive exhibitions to date. Curated by Cristina Carillo de Albornoz and Ksenia Malich, the exhibition will examine Calatrava’s innovative style through his various artistic realms. From never-before-seen paintings and sculptures to celebrated architectural models and sketches spanning Calatrava’s 30- plus year career, the exhibition will give individuals a unique opportunity to explore the inner workings and creative process of this celebrated artist. More images and information on the event after the break.

WILCOTER Architects shared with us their first prize winning proposal in the international competition to design a group of buildings as the headquarter of China Life Insurance (Group) Company in the Qianjiang New City of Hangzhou. The concept is to create a ‘Tree of Life’, which means supplying a cover or shelter for the life, which is strong and safe to rely on. More images and architects’ description after the break.

will bruder+PARTNERS Splits into Two

Starting today, one of Arizona’s most well-known architecture firms will no longer be will bruder+PARTNERS. After a successful 17-year history, the practice has branched into two independent firms with diverse architectural offerings due to a “natural evolution of individual and collective goals relating to firm size, design methodology and management.” Together, the internationally respected firm has created landmark buildings throughout the state, including projects such as the Burton Barr Library and the Agave Library. And now, each will go their separate ways as the firm has split into Will Bruder Architects and WORKSBUREAU.

Continue after the break to learn more about each firm.

AD Recommends: Best of the Week 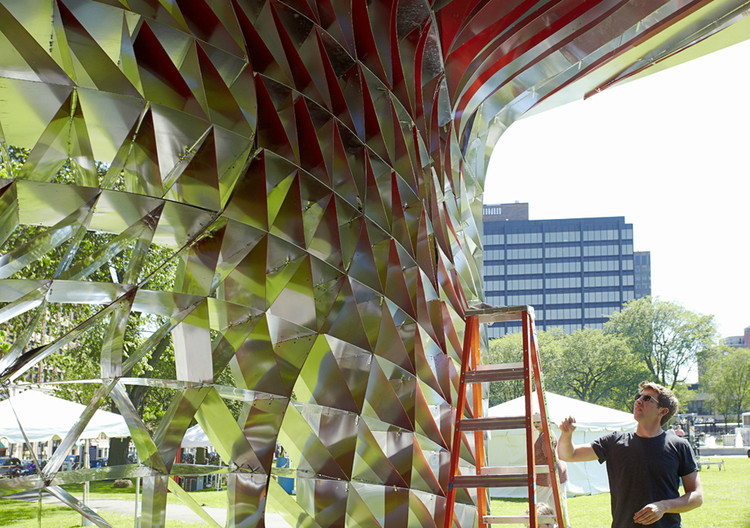 Directed by Romain Tardy & Thomas Vaquié, Omicron installation, the piece proposed for the Centennial Hall of Wroclaw, is based around the notion of timelessness in architecture, and the idea of what future has meant throughout the 20th century. Taking the 1910’s as a starting point (the dome was erected in 1913), historical and artistic references were used to reveal the architecture of the space, its timeless and, more surprisingly, very modern dimension. More images and their description after the break.

As part of the the expansion of the university town of Uppsala, just north of Stockholm, the project by Karlsson Wachenfeldt Arkitekter for the Studenternas IP is a sports field with long traditions situated by the river Fyrisån. Located in the center of the town within the park, the design project is part of a major re-development of the south river area that includes housing, parks, sport facilities and infrastructure. More images and architects’ description after the break.

The Subordinate Courts of Singapore recently announced the proposal by Serie Architects and Multiply Architects as the winning design for their new courts complex. Their design features an innovative two tower strategy in which one tower is dedicated to the criminal courtrooms and the other to the judges’ chambers and support functions. The two towers are linked by a series of foot bridges that enable the controlled circulation necessary for the courtroom process. More images and architects’ description after the break.