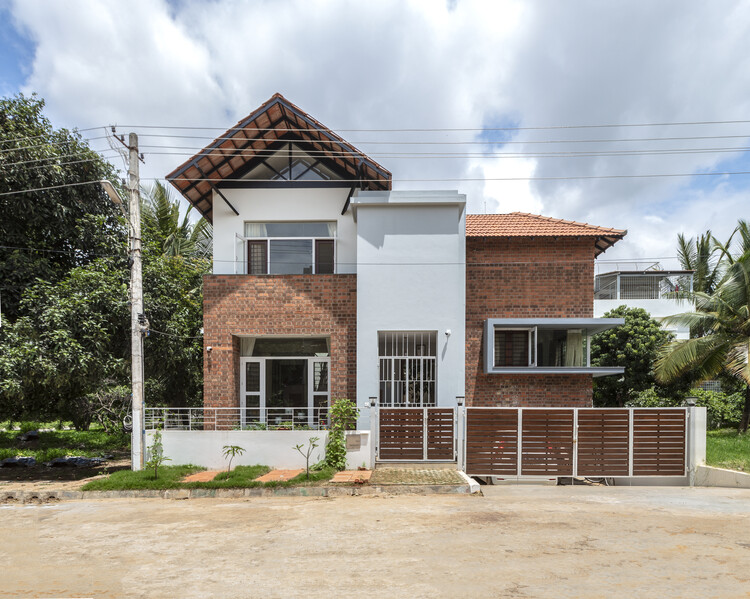 Text description provided by the architects. Sculpted by parameters not limited to the physical and contextual realm, this house was designed to embody the ethos of its inhabitants, and their cultural background and become a repository of memories and experiences. Situated on a 60 X 40 site in Southeast Bangalore, the house is for a young family of 5 and a dog (who is an equal part of the family). Our design approach was to let the hierarchies of functions, requirements, and climate dictate the evolution of form so that the house becomes an organic extension of the family itself. In terms of the requirements, the client wanted individual rooms for every member while also having spaces where the family can come together for joint activities. Furthermore, being nature lovers, they wanted to integrate as many greens and natural light as possible.

The two tenets here, the integration of greens and natural light along with having common spaces for the family, led to the creation of the courtyard, which then became the design and conceptual fulcrum for the spatial planning of the house. All the other zones as well, are placed around the courtyard making it visible from all the common areas of the ground and first floor. A staircase wraps the courtyard leading to rooms on the first floor. Another consideration in favour of the courtyard was the fact that we wanted to drastically reduce the elimination of existing trees from the site and the courtyard not only helped in reducing this elimination but also assisted in articulating and composing nature and light within the built space.

As one enters the house, eyes are naturally drawn towards the magnanimity of the tree that reaches from the floor to the double-height ceiling and the volume of sunlight pouring in through the L shaped skylight while another factor that has a subliminal impact is the play of levels between the living and the courtyard; which was actually birthed by the need to accommodate the semi-basement parking thus leading to the raising of the entire ground floor except for the living area and the foyer. The level difference not only highlights the courtyard but also demarcates it organically.

The skylight gets its L shape by mimicking the sun path so that the prayer area is naturally lit up throughout the day. While the large skylight elevates the living experience it poses a huge challenge for indoor heating and to tackle this we have deployed three design strategies: we ensured there is direct cross-ventilation between three sides that is north, south, and east, and to let the accumulated heat dissipate faster we installed wind-driven circular turbines over the skylight and lastly, the initial part of the skylight has a trellis-like structure made of bamboo sticks that not only cuts direct sunlight but also creates interesting shadow formations on the wall.

Owing to the client’s roots, influences of tropical architecture play out through the house. The influences can be seen in the façade with the usage of a slanted roof and wherever possible materials have been kept exposed. The material palette largely comprises exposed red bricks, concrete finish, wood, and yellow Kota stone, which in unison create a medley that is earthy, rustic, warm, and embracing. In the culmination of all its elements, the concluding form is unassuming, honest, and empathetic in all its functions and interfaces. 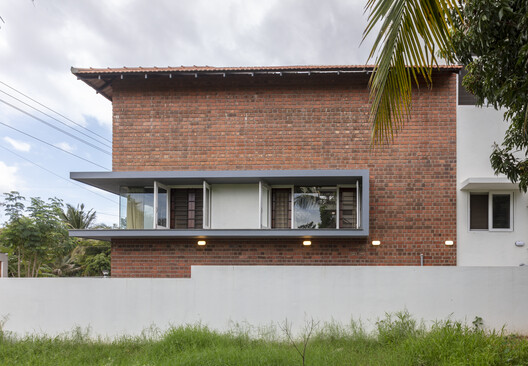