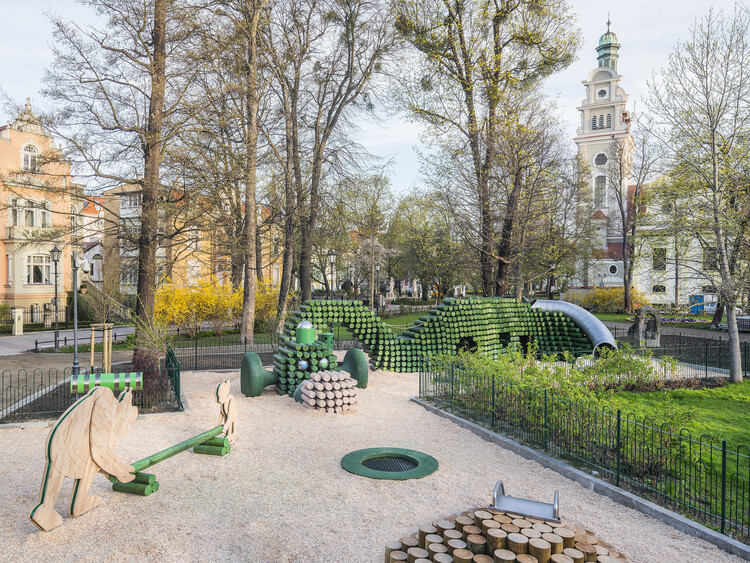 Text description provided by the architects. The Cuddly Playground in the Southern Park in Sopot, Poland is a public space telling the story of Kayko, Kokosh, and Cuddly the dragon - the characters from the animated series inspired by the cult comic book series. Moreover, the playground commemorates their creator Janusz Christa, a famous resident of the city.

The playground – inspired by the aesthetics of Mirmiłowo village - is built from wooden beams painted green and other natural materials. The forms obtained are either simplified silhouettes of animation characters or more abstract elements of the fantastic landscape. Moreover, the Cuddly Playground is composed of zones appropriate for various levels of psychomotor skills, making the space both integrative and development-oriented. The entrance part of the Cuddly Playground is dedicated to younger children, while the area in the background around the dragon is intended for older children.

Spending time in the animation-inspired space is an exciting adventure. While exploring the playground, kids gradually become acquainted with the characters from the animation. At the entrance, children are greeted by the Slavic warriors cut out from wooden boards. Kayko and Kokosh carry a wood log painted green - the same as those used to construct the Cuddly dragon.

A little further on, kids can climb a hill made of accumulated stumps, from which there is a good view of a giant creature! Children can stay in the Mirmiłowo area and watch Cuddly while jumping on the trampoline, swinging on wooden platforms or resting on the hill. But if they want to get closer to the dragon, it is just a quick ride down the slide and a short walk leading under the nose of a friendly creature.

Cuddly is a sculpture to play and explore – a large-scale playscape constructed of wooden logs in dragon green color. To provide the widest range of play possibilities, a multifunctional form is supplemented with additional elements for climbing, sliding, swinging, drumming, and jumping. Textural plug-ins on the dragon's back provide haptic experiences, while his moving eyes allow learning color composition.

The creature's characteristic tip is both a revolving rattle and a distortion mirror. A cave carved into the creature's belly, which can be accessed either through the tail entrance or by climbing through a hollow above the dragon's left paw, is a perfect hide-out from parents. The second, higher paw makes it possible to climb onto Cuddly's back. There, children can rest on a net platform, descend through a rope tunnel into a cave, or slide down a winding tube slide down the creature's tail. For the sake of the user’s comfort and safety, Cuddly's paws, ears, and nose are finished with a rubber EPDM surface.

The use of wood and natural materials supports children's environmental education, while the intuitive forms of toys exercise their imagination and creative cooperation skills. 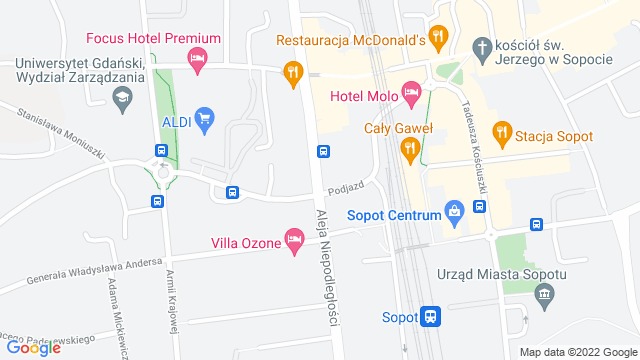 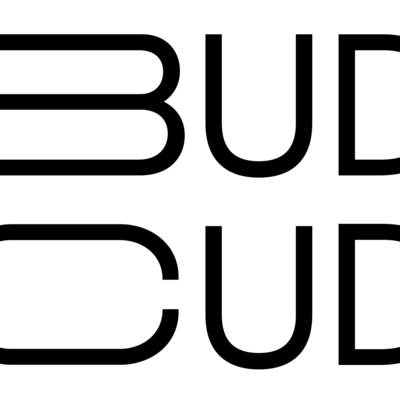 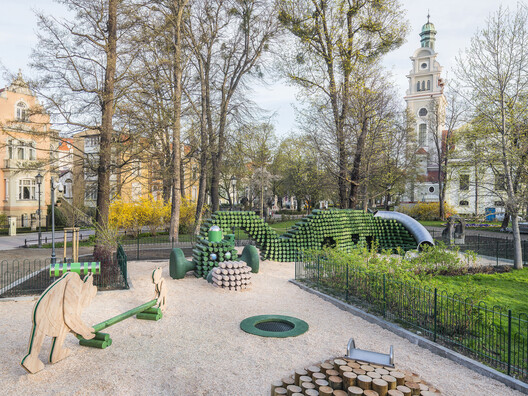