✕
Save
Poland's White Gold: The Story Behind one of the World’s Biggest Adaptive Reuse Projects
Share
Or
Copy

The Republic of Poland boasts diverse geographical territories and cultural tribes that span thousands of years. Its cities and towns reflect a whole spectrum of styles, from Romanesque architecture to Gothic Revival and postmodernist residential and commercial structures. In addition to its unique topography and rich urban fabric, the country houses 17 UNESCO World Heritage Sites. One site, however, has stood out from the rest and given the country a royal status. Tucked beneath the Malinowka stream, just outside the southern city of Krakow, is one of the world's oldest and largest hand-chiseled underground mines that has been transformed into an expansive, all-inclusive complex. From a naturally-healing health center to a secluded church and an underground bungee jumping platform, this colossal adaptive reuse project is the Wieliczka Salt Mine. 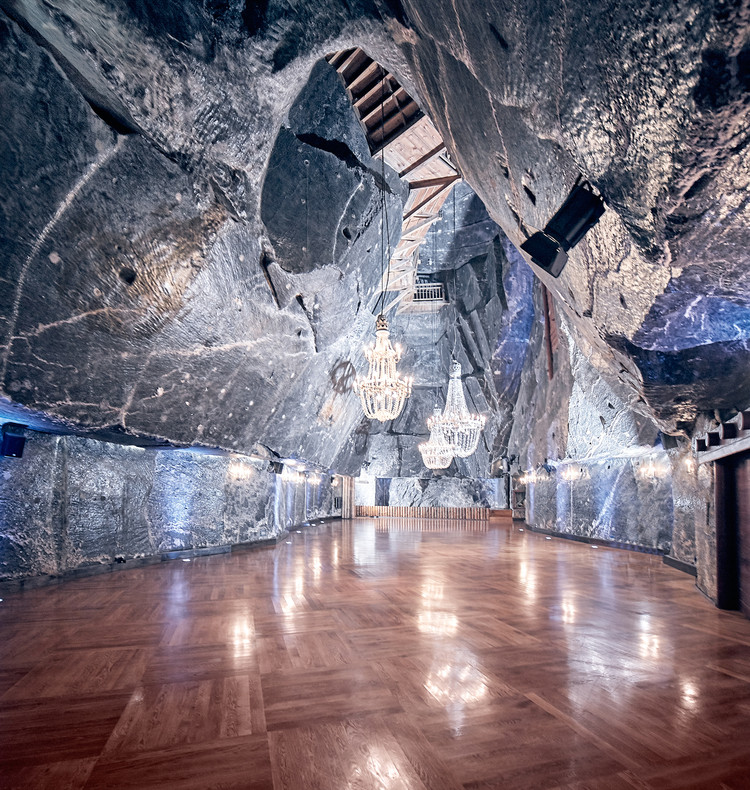 Known as “one of the seven miracles of Poland”, the Wieliczka Salt Mine dates back to Mid-Neolithic times. Archeologists discovered prehistoric salt works that were almost 5.5 thousand years old, where inhabitants of present-time Wieliczka retrieved brine-like material from surface springs and evaporated it in the heat of their fires to create salt. Hundreds of years later, excessive salt cooking dried the saline springs, which forced inhabitants to build wells in order to deepen what’s left of them. Shortly after digging these wells, people discovered the first block of rock salt, which encouraged them to dig deeper and explore a new precious and raw material.

Salt became a priceless national treasure, and the picturesque underground geological structure of the Wieliczka mine was not found anywhere else in the world. In the second half of the thirteenth century, Wieliczka was known as the largest salt producer in Poland, which is why it was named Magnum Sal (the Great Salt). So much so that the profits from selling salt made up a third of all Polish crown’s treasury income.

Urban Sprawl and Ghost Towns: The Impact of Mining on Cities

A lot of labor, ingenuity, and creativity were spent in these mines. Up until the end of the fifteenth century, salt was mined 64 meters below ground level, which is present-day’s Level I. With every century the mine grew bigger, becoming one of the largest firms in Europe with its own canteen and employee shelters and facilities. By the 17th century, the mine was already excavated on three levels, and was drafted with respect to the urban planning above it. Fast forward a few decades later, new methods, equipment, and tourists were introduced into the mine, along with novel visitors and high-ranked politicians, sustaining the grandeur of the complex until the 20th century.

It was only after the Second World War, when salt production reached its peak and people from all over the world became aware of the history and cultural significance of the site, that the mine became a challenge to maintain. Although it was providing a lot of profit, the government and administration’s main focus was to preserve the site for future generations, an idea that was slowly becoming difficult to achieve. In 1964, the now-nine level mine (327 meters below ground) was no longer used for rock salt mining, resorting to industrial production of evaporated salt instead. In 1978, UNESCO listed the site on the World Cultural and Natural Heritage List, and in 1996, a decision was made to end industrial salt production indefinitely in Wieliczka, inaugurating what the site is used as today.

So what’s left of the places where salt was extracted? Since salt is no longer mined in Wieliczka, its chambers and corridors are currently being restored and made available for sightseeing, performances, physical healing, prayer, and royal banquets. Instead of salt excavation, miners today are still working on site to preserve the historic landmark. Over the course of more than 700 years, 26 shafts were struck in Wieliczka. In fact, the labyrinth is so colossal that visitors only have access to 2% of the site.

One of the main facilities offered on site is a health resort. Patients with chronic diseases of the sinuses and throat, asthma, bronchitis, and pneumonia benefit from the unique characteristics of the underground microclimate. The air inside the mine passes through a series of salt corridors, which cleans off pollutants that are on the surface. In 2019 and 2020, COVID-19 patients visited the Wieliczka salt mine to treat their lungs.

Each chamber of the now-multipurpose site has a unique function and spatial layout that tells the story of how the mine was formed and all the people who stepped foot in it. Some are used as venues with lavish chandeliers, while others have been transformed into extraordinary chapels or taverns. A 36-metre high chamber is now used as the world’s first underground bungee jump and hot air balloon setting. Visitors can select two different routes, either the tourist one, which takes them on a journey through the chambers mentioned above, or the miners route, a challenging, multisensory expedition that allows visitors to wander through underground salt labyrinths and perform mining activities.

The walls and ceilings of chambers used as banquet halls, event venues, and chapels are left in their raw, natural state, and complemented with crystal chandeliers and wooden flooring. In some chambers, such as the St Kinga’s Chapel, salt sculptures and floor reliefs were created by working miners centuries ago.