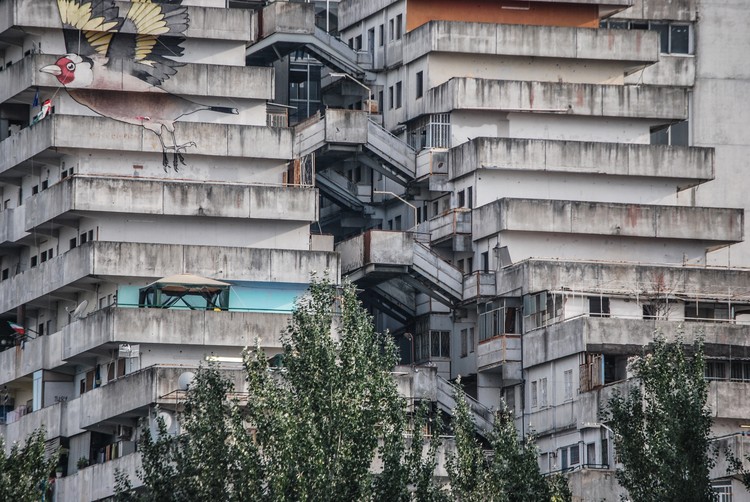 When looking at social housing projects, we see projects that aim to house those with the least resources, and they can come in a variety of different forms and sizes. Yet even with these good intentions, a quick look at history tells us of social housing projects which have failed, exposing the importance of good design in creating a successful social housing scheme, of how frequent maintenance plays a large part in the successful longevity of a scheme, and how the lack of adequate care to vulnerable communities by governments can result in housing that harms the very communities it is supposed to shelter and protect.

One of the most emblematic examples of the complicated nature of social housing, referred to as ‘Public Housing’ in the US, is that of Cabrini-Green in the Near North Side of Chicago in the state of Illinois. A key part of the narrative of the recently-released Candyman film, this housing project came about in its most well-known form in the 1950s, as African Americans migrated northwards from the South. New public housing was needed, so Chicago’s city council saw it fit to clear already existing slums in African American neighbourhoods to provide space for new higher-capacity buildings.

The result was a series of monolithic concrete tower blocks, poorly built and difficult to maintain. Communities were artificially constructed, cut off from the neighbourhoods around them. Geographic concentrations of poverty were created, amplified by Cabrini-Green’s location in between Chicago’s wealthy enclaves of Lincoln Park and the Gold Coast. The residents of Cabrini-Green were left isolated, forced to organise maintenance themselves and to appeal to the poorly-managed Chicago Housing Authority for support. Green spaces were paved over by the council in order to save costs of upkeep, leaving residents with little public spaces for gathering, and balconies were fenced in to prevent residents from emptying garbage cans into the yard, creating what was a startlingly prison-like façade. The Cabrini-Green development is a saddening example of how design can have a negative social impact, with the very residents of poorly designed and poorly maintained public housing then turned unfairly into scapegoats of bad public housing.

Over in Europe, one urban housing project that did not live up to its ideas laid out upon its conception was the Vele di Scampia project in the southern Italian city of Naples. Designed by the Italian architect and urbanist Francesco Di Salvo, the project sought to recreate the distinctive nature of Naples’ alleys and courtyards in an apartment building. The dwellings, in a unique sail-like shape, were designed deliberately to be minimal, the point being that the shared exterior spaces would facilitate a vibrant community life. This, however, did not really end up happening.

The housing project was not built as planned, and the green areas which were designed were left neglected. The blocks were placed too close to one another, a departure from the original design, which limited natural light in the apartments. Service areas, school centres, and churches that would have served as a backbone for a lively community were not built, and common spaces which should have been built every six floors were omitted. In similar fashion to Cabrini-Green, the municipality did a poor job of caring for its residents. Apartments were allocated to prospective residents without being completed, lacking essential facilities such as toilets, electricity, and gas. The 1980 Irpinia earthquake made matters worse, as families left homeless after the disaster occupied apartments illegally, and were left neglected and ignored by the government.

While external factors indisputably contributed to the failure of Vele di Scampia, it can be argued that its architectural design was in some ways a contributing factor to its decline. Its “tower in the park” model which blurs the line between what is public and private space, a design decision by Di Salvo which looked to Le Corbusier for inspiration, is not the best approach for deterring crime. It is an approach discouraged by urbanist Jane Jacobs, who viewed a successful urban project as one that embraced the community – and looked outwards instead of inwards.

What Cabrini-Green and Vele di Scampia show us is that what makes a successful social housing project is a complicated mix of many, many factors. It is a lesson that shows us that simply demolishing these “failed” urban projects will not solve the underlying social problems that caused their decline in the first place. It is also a reminder that the communities with the least resources deserve continuous conversations that put their needs first.