Text description provided by the architects. The greatest challenge of the project development, was the guiding intent to respect and recover the ancient memory of the site, reconciling it with the intervention we were to carry out.

On the site existed a 16th-century construction that had been adulterated by successive additions, made throughout the 20th century, without any architectural or historical significance. In consequence, the first gesture was to identify and recover the original traces of this construction. Secondly, conditioned by the intent to respect the primitive construction, the insertion of the necessary functional program would have to be made in newly constructed volumes, releasing the historical heritage of the site.

Therefore, the final composition resulted in the articulation of three distinct volumes:

The original construction, maintaining its image and materiality through the recovery of the stone walls and their decorative elements. The singularity of this construction and its implantation on the site was used to emphasize the main entrance;

A prominent contemporary volume, where a new set of bedrooms was developed on the upper floor, sought to establish a strong relationship with the primitive construction by respecting its dimensions, not exceeding it volumetrically, as well as through its relative placement, aligned, near, but not overlapping the latter, and lastly, by recovering the language of the traditional threshing houses in the area, with a similar façade composition, where once there was a cereal drying threshing floor;

The third volume seeks to establish the volumetric connection to the south, in a contained way, allowing the comprehension of this architectural set, integrating the new and the old.

Functionally, we sought to design a fluid space, that would be easy to perceive, but unique and adapted to its habitational purpose. With this intent in mind, the differentiation between spaces was marked through the different floor and ceiling heights, as well as through the introduction of patios and moments of zenithal light.

The intent to obtain a fluid space dictated the structural solution that is embedded in the architecture, which consists of three large beams that run the entire length of the south volume. This solution allows the non-existence of pillars in all spaces, materializing the desired experience. 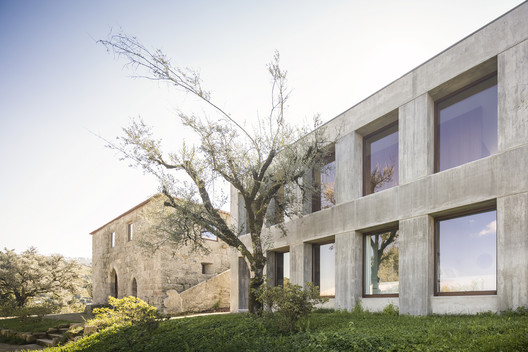