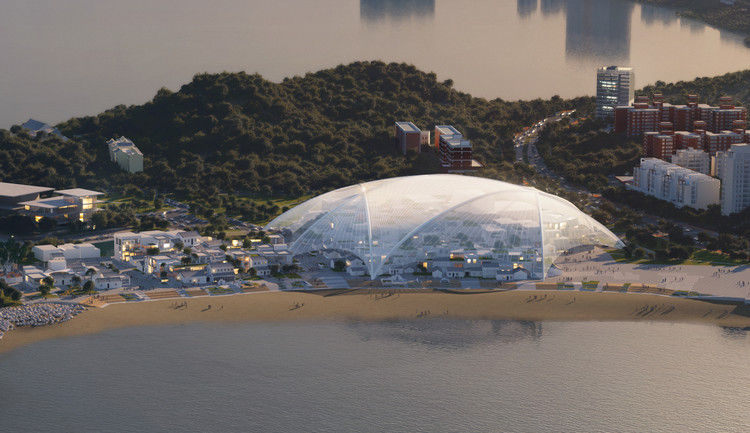 To conduct field research of the area, MAD looked into the remaining traces of the centuries-old village, and conversed with residents who refused to leave their town. The citizens' strong sense of emotion and memory, and the remains of the town's urban fabric inspired the architects to be the only firm to propose a design that goes against the demolition and preserve the village's memory. The new civic center will be a human-centered project that restores the public life and promotes respect and acknowledgement of the town.

Instead of building over the ruins, MAD will be "protecting" the original urban layout and remains of Yinkeng with a large dome, hovering over the reinvented structures. The large volumes and functional requirements of the cultural arts center have been arranged to compliment the existing topography and architecture, resulting in scattered block-like buildings.

Similar to how citizens used to walk the streets of Yinkeng in the past, visitors will be able to explore different functional areas of the civic center along the original road layouts. The architects paired the original roads with new landscape, which form a new visiting experience on their own. Following the old-paired-with-new-approach, the architects preserved the village's original plaza, green space, pond, and the iconic ancient banyan tree. The outdoor plaza beneath the tree has been redesigned to reflect the nature of the Southern Guangdong region.

Architecture is closely linked to human behavior; it carries emotions and memories. Without "people", there can be no continuation of culture and civilization. Architecture should not convey cultural values that lack human feelings or a respect for history. Massive demolition and construction risks erasing historical traces, replacing it with vast squares, and buildings without roots or soul. We should focus our attention back on history, and the extension of our existing cultures. We must avoid the cultural fault lines, so that people, nature, the past, and the future can coexist in a harmonious world. -- MAD Architects

The grand floating dome unites the entire cultural center as a symbol of preservation and strength. It consists of a main arch and cable membrane, reaching a height of 45 meters. The dome is made of a translucent membrane material, appearing as a layer of mist that blends with the sky. Although its main structure is well-rooted into the ground, the membrane remains open at the bottom, allowing people to enter and exit freely.

The dome offers energy-saving features that take into account the climate and ecological environment of Zhuhai, and follows the principle of "generating resources while reducing expenses.” The project takes full advantage of renewable energy, with the proportion of use between efficient systems and infrastructure equipment reaching 80%. 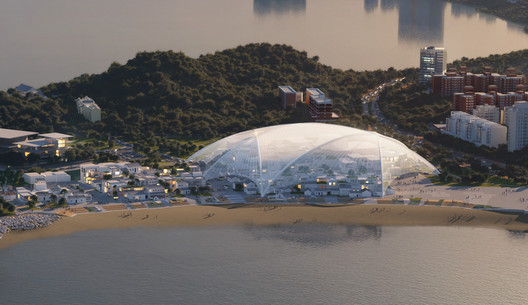