Led by OUTCOMIST, an international design team including Diller Scofidio + Renfro, PLP Architecture, CRA - Carlo Ratti Associati, and Arup won the competition to revitalize the Porta Romana Railway Area, transforming the industrial site into a diverse green neighborhood in Milan. Rehabilitating a disused railway yard into a connective tissue that links the southeast area of the city to the center, the development will generate a rich biodiverse public space, including a large urban park. 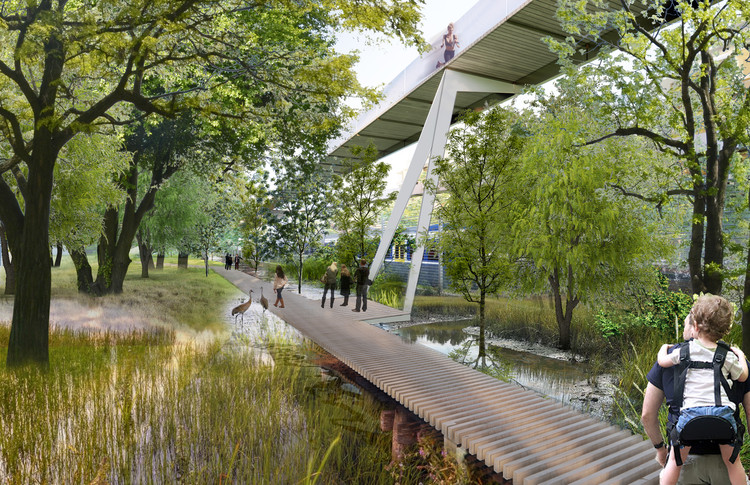 Parco Romana is an urban-scale redevelopment located in Milan’s Porta Romana district. Reinterpreting the industrial legacy of the site, the winning proposal by OUTCOMIST, Diller Scofidio + Renfro, PLP Architecture, CRA - Carlo Ratti Associati, and Arup reanimates the area with contemporary programs centered on an ethos of sustainability. Aligned with the goals of the Paris Agreement, the European Green Deal, and the National Recovery and Resilience Plan defined at the SDG level of the United Nations, the regeneration project rethinks a large railway yard, stitching together a fragmented urban realm. Selected through a major international competition that included 47 teams comprised of 329 studios, the selected team is collaborating with Gross.Max, Nigel Dunnett Studio and LAND for landscape design.

A project for the city and people of Milan, Parco Romana “will be developed with extensive engagement and consultation with the municipality, local citizens, and stakeholders”. Rooted in the principles of inclusivity, biodiversity, resiliency, connectivity, and wellbeing, the vibrant mixed-use district, offering shared environments for living and working, takes on a large park at the heart of the development. Extending over the active railway, the park creates an accessible and multifunctional green space for the neighborhood.

“The Suspended Forest -- a linear elevated greenway that helps to contain, rather than erase, existing railway infrastructure -- includes hundreds of trees providing dedicated walking routes with unexpected views overlooking the surrounding area”. Focused on health and wellbeing, the intervention puts in place a biodiverse woodland and wetland Eco-zone interspersed with community gardens. While the Eastern Gateway district provides a new business core for the city, the western edge, creates a mixed-use residential district that will initially house athletes for the Milan 2026 Winter Olympics, before transforming, after the Games, into a permanent intergenerational residential community, including a major public piazza.

Inspiring mobility solutions, Parco Romana is aligned with the 15 Minute City ideas, providing “everything needed for daily life within a short walk from the district’s living and working environments”. Focusing on pedestrians and cycling instead of automobiles, the development activates new paths to and through the site, forming corridors integrated with new public plazas that act as natural gathering places at the intersection of major pedestrian routes.

Read on more for more information about the winning team members.

OUTCOMIST is a strategy group that leads complex urban projects, assembles extraordinary teams, builds consensus, and creates comparative advantages for a broad range of public and private stakeholders. The group leads initiatives for city governments and private clients to improve regional rankings and urban performance. Founder Chris Choa is a Global Trustee of the Urban Land Institute. He is an active board member for organizations related to real estate, urban mobility, energy, and digital arts. Previously, he led AECOM’s Cities Consulting practice. He has previously been an appointed advisor to the Mayor of London.

Diller Scofidio + Renfro (DS+R) is a New York-based, interdisciplinary design studio. With a focus on cultural and civic projects, DS+R’s work addresses the changing role of institutions and the future of cities. DS+R completed two of the largest architecture and planning initiatives in New York City’s recent history: the High Line and the transformation of Lincoln Center for the Performing Arts. In 2019, the studio completed two significant cultural projects in New York: The Shed and the expansion of MoMA. Currently, DS+R is designing the New Museum of Transport in Hungary and Pirelli 39, a new model for mixed-use development in Milan’s Porta Nuova Gioia District (with Stefano Boeri Architetti).

PLP Architecture is a collective of architects, designers, and researchers who value the transformative role of ideas and architecture’s ability to inspire. Based in London, the practice is led by an experienced and dedicated group of partners who have worked together for more than three decades. PLP has designed and delivered a wide range of intelligent and ground-breaking projects around the world, including The Edge in Amsterdam, Corso Como Place in Milan, 22 Bishopsgate and Bankside Yards in London, and currently the new global headquarters for Yandex in Moscow. It has created some of the greenest buildings on the planet and is now designing and building projects on three continents.

CRA - Carlo Ratti Associati is an international design and innovation practice based in Turin, Italy, and New York City. Drawing on Carlo Ratti’s research at the Massachusetts Institute of Technology (MIT), the office is embracing every scale of intervention. CRA has been a pivotal actor in the urban regeneration of Milan, designing projects such as MIND-Milan Innovation District in the former site of Expo 2015, the new science campus of the University of Milan, research center VITAE, and MEET Digital Arts Center. The studio also created BIOTIC, an extension of Brasilia’s historic master plan. In March 2021, it won the Helsinki Energy Challenge with "Hot Heart", a vision to decarbonize the Finnish capital's district heating system.

Arup is the creative force at the heart of many of the world’s most prominent projects in the built environment and across the industry. Working on 17,000 projects in 146 countries, the greatest impact Arup can have is through its work with clients and partners working on transformational projects such as this one. The firm’s designers, engineers, architects, planners, consultants, and technical specialists work with their clients on innovative projects of the highest quality and impact, embedding the UN Sustainable Development Goals (SDGs) in all that they do. Marking their 20 year anniversary in Milan they look forward to continuing their role in helping to shape the fabric of their city.