Rather than propose art for the new Gibellina, Burri turned to the old city’s ruins. Since living in Los Angeles and repeatedly visiting Death Valley in the 1960’s, Burri had become deeply interested in the phenomenon of natural cracking in the land, leading him to incorporate cretti (cracks) in his paintings from 1973 on. This series, which was aptly titled Cretti, combined zinc white pigment with polyvinyl acetate, forming a thick paste on the canvas surface that would naturally crack over the course of several weeks. The culmination of these experiments was Burri’s work on the Gibellina ruins, wherein he coated the city remains in white concrete with large enough cracks to walk in, resulting in a monumental and labyrinthine landscape artwork spanning over 85,000 square meters—making it one of the largest artworks ever realized. Titled the Cretto di Burri, or alternatively the Grande Cretto, the piece was worked on from 1984-1989 before it was interrupted and left unfinished. In 2015, on what would have been Burri’s 100th birthday, the project was finally completed.

Each concrete slab in the Cretto di Burri measures between ten and twenty meters on each side and stands at around 1.6 meters tall. The enormous yet walkable fissures in the concrete mirror the old town’s streets and corridors, reconjuring spatial memories of the destroyed city while marking its status as uninhabitable ruins. In Burri’s imagination, the cracked landscapes of Death Valley that had served as inspiration for his work functioned as a kind of psycho-geography, suggesting the violence and trauma of fascist rule and industrialized warfare that he had experienced as an Italian citizen living through both World Wars. In similar fashion, the cracked white concrete of the Cretto di Burri memorializes and reifies the trauma and grief of the Belice earthquake, with the fissures marking not just the literal roads and streets of the original town but also the violence done to the land, people, and profoundly to the cultural memory of the site.

The white concrete, as a common urban construction material, suggests the pale corpse of the lost city, while the textures and fissures marking the presence and memory of the old city reveal the futility of erasing and moving forward on a psycho-geographic tabula rasa. Altogether, the Cretto di Burri beautifully responds to a moment of profound cultural grief through its pared-down, yet highly suggestive form and materiality. 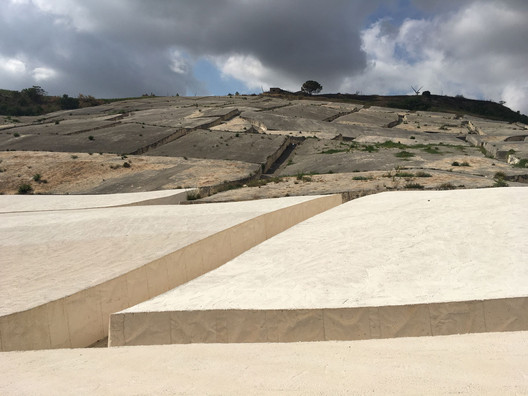