Save
Stockton: High Street To Be Demolished to Make Way for Riverside Park
Share
Or
Copy

An extensive urban regeneration project is slated to take place in the town of Stockton in the United Kingdom. A 37-million-pound project, the proposal - drawn up by Ryder Architecture and backed by the Stockton Borough Council - will demolish half the high street in Stockton’s town centre and replace it with a riverside park. 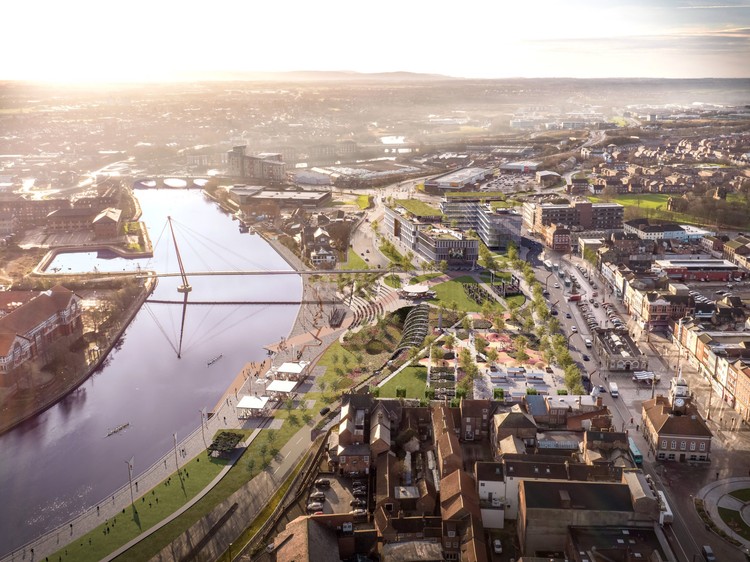 Seeking to revive the town’s high street, the council bought Castlegate Shopping Centre in 2019, and it is this shopping centre that will be demolished in 2022 to make way for a twenty-thousand square metre park with greenery, art installations, and a land-bridge to the River Tees, currently obscured by the existing shopping centre. Built in the 1970s, the brick building eliminated existing Victorian paths that led to the river, closing off access to the river and doing little to contribute to the urban streetscape. Retail vacancy rates in the town have also heavily increased in recent years - rising to three times the national average, influenced by changing consumer habits and the presence of too many retail units, with many spaces in need of repair or too large to turn over a substantial profit. The onset of the COVID-19 crisis has also further added to the plight of Stockton’s high street - mirrored by struggling high streets across the UK.

The provisional designs for the project show the addition of a new land bridge covering a section of the riverside road - which will be reduced to two lanes. This new land bridge will connect the river to the high street, creating a series of steps with an informal amphitheatre that faces the waterfront, making a public gathering space. The new park will include an extension of the existing market square, together with a large playground area and circular lawn for outdoor events. At the southern end of the site, two buildings will potentially allow for the provision of a central library, customer service centre, and council headquarters. Existing tenants of Castlegate Shopping Centre will also be given the opportunity to move into empty units at the nearby Wellington Square shopping centre.

The masterplan proposal is set to take around three times the area of London’s Trafalgar Square, and playing down the doubts of such a large-scale proposal, Nigel Cooke, a cabinet member of the regeneration project, is highly confident that Stockton will be able to make it a vibrant public space.

We are very much an events town. The international riverside festival pulls in hundreds of thousands of people from across the country each year, and we’ve held international athletics and cycling championships on the high street before. The park’s success will rest on the finer detail of the design. -- Nigel Cooke, Stockton Council Cabinet Member for Regeneration and Housing

Around the world, recent years have also seen more cities and firms take a greater interest in the urban regeneration of their public spaces. In Bellinzona, Switzerland, Swiss firm TAMassociati designed a ‘future proof’ urban masterplan that conceives the gradual development of the city, with multi-use infrastructure that integrates green spaces with built architecture. In contrast to this approach, there has also been the wider emergence of “urban acupuncture” - a design tactic that promotes highly specific and targeted initiatives to regenerate neglected spaces, such as the creation of pocket parks and community gardens in leftover urban spaces.

Stockton Borough Council's plans for regenerating a central part of their city is optimistic in its scale and vision, and will certainly serve as a model for other UK high streets to emulate.

Info via The Guardian. 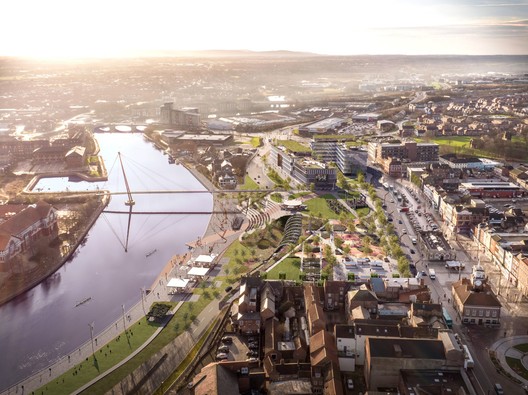