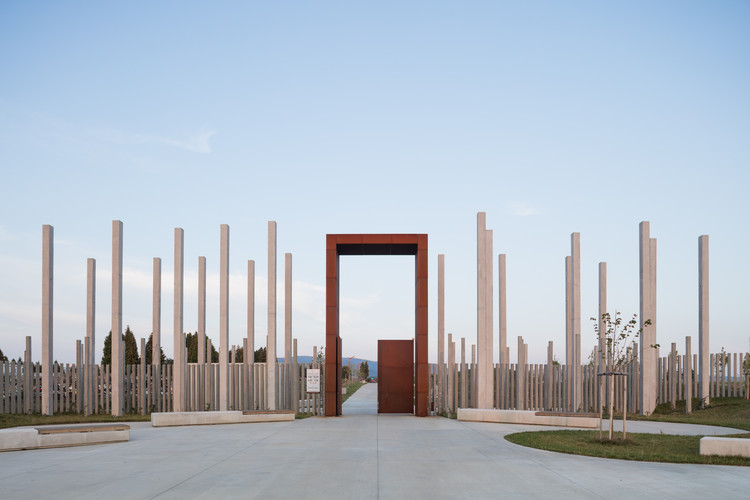 Text description provided by the architects. The City Cemetery is designed as a forest park – a green oasis in the residential area.  Therefore, it is no longer a strictly monofunctional structure.

The natural character of the area is characterized by high and low greenery. A large area is set for each gravesite. Decoration of graves is preferred only with natural materials and greenery. Grave units are evenly arranged, the public greenery is professionally and sustainably maintained and there is an active water collection system in the area.

The New City Cemetery is located on the southeast outskirts of the city between Solivar and Šváby residential areas. The entrance to the area is through the monumental western gate – the main landmark of the large cemetery area.

An archaeological survey was carried out before the beginning of the construction concluding that the site was inhabited in the Neolithic. The archaeological findings from historical periods are presented on info panels throughout the area.

The combination of burial grounds and forest parks determined the basic urban principle. Location of gravesites in a loose composition and preservation of the natural character of the area was supported by new plantings and a purposefully shaped flat site which together created interesting horizons of the views and crannies.

The planted greenery and terrain modelling contrast with the grid (40x40m) of concrete roads and graves surfaces.  The New City Cemetery also serves as a peaceful park for residents of the area.

Architecture as sculpture. Three dominant materials were used: corten steel, exposed concrete, and wood. Corten steel is used as a symbol of gradual aging on the entrance portal. The entrance gate and fencing built of slender concrete columns is a spatial and visual landmark rather than a physical barrier. It is "crossed" by several times higher verticals of the same material.

Atypically shaped elements of small architecture – benches, waste bins, information and orientation boards, lighting fixtures – are in line with this concept. Placement of works of art and sculpture in endpoints of main roads is planned in the future.

In the future, the planted greenery will contrast with the concrete surfaces of roads and graves. Even nowadays, it completes the atmosphere and at the same time replaces the missing park areas of the surrounding residential area. Alleys and composed groups of trees will create scenery and nooks that change according to the seasons.

The technical solution includes retention tanks, wells, rainwater drainage, and an irrigation system ensuring the water cycle of the area and sustainable operation. The first phase of the project is completed and its outcome defined a clear concept and direction of development of the area in the future. 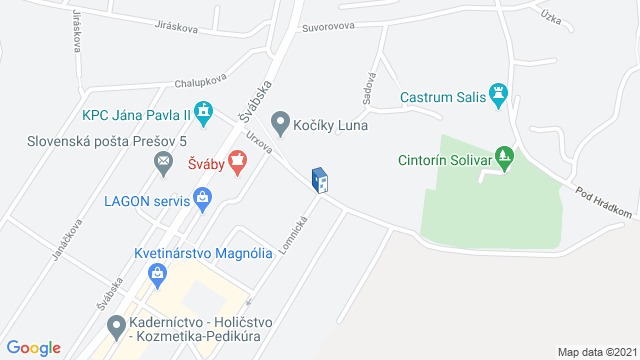 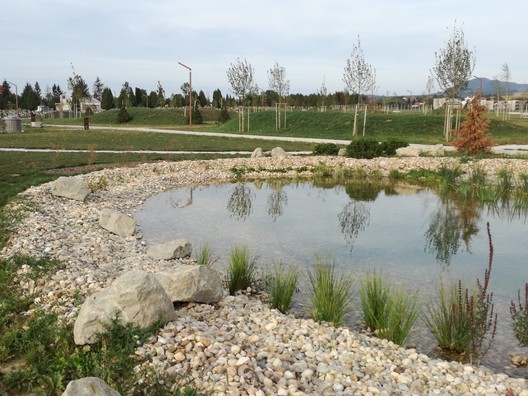