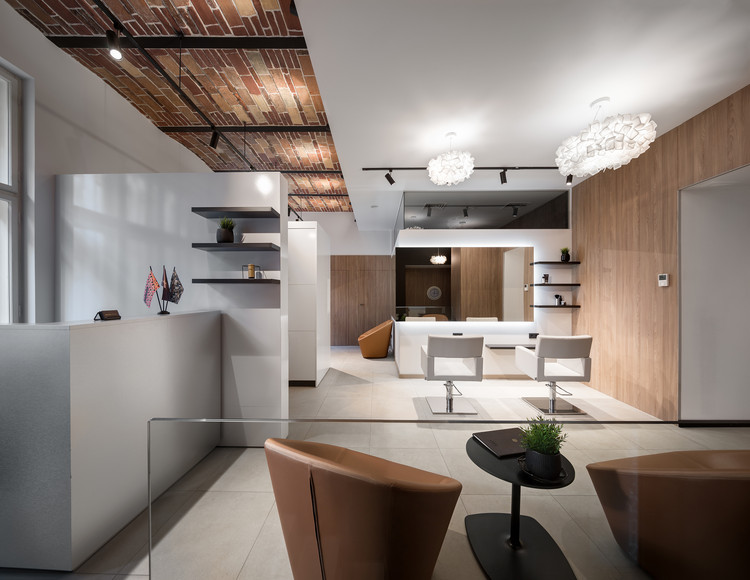 Text description provided by the architects. BANKHOTEL is located in the reconstructed historic building of the former Austro-Hungarian Bank. At the heart of our planning solutions is the idea of the fullest possible preservation of the building’s authenticity. Valuable elements have been restored and combined delicately with contemporary design.

The lobby with its marble staircase and stained-glass windows, the tile flooring of the first floor lobby and the second floor hall, the facades have been preserved and restored. One of the key planning problem was to find a way to combine the grand stairs of the bank and the staircases of the residential area at the first floor. This only became possible through including the courtyard into the planning structure, burying it 1.85 m into the ground and covering it at the level of the first floor.

The building’s authentic roof was destroyed, thus in order to replicate its initial shape, the architects used copies of original blueprints they found in archives. It was possible to build three additional stories of hotel rooms in the attic’s volume upon its restoration and increase the total amount of guest rooms.

In the structure of the hotel, the following public areas are positioned: on the first floor – the Safe restaurant, on the seventh floor – the Reserve wine bar with a terrace, which offers a magnificent view of the historical Lviv city center; a spa, a fitness room, a beauty salon, and the Satirikon night art-bar with an independent entrance from Lepkoho Street.

The location of the operating room in the structure of the former Bank was viewed as the opportunity to design a 300-seat congress hall, which can be converted into 8 separate conference rooms by sliding partitions. Based on the former banking identity of the building two art-projects were created: “Banknotes and Shahs” and “Coins”. The first project shows the banknotes of the Ukrainian People's Republic printed on large sheets of glass. “Coins” is associated with the beautiful anniversary coins of the National Bank of Ukraine.

The concept for the public spaces is about restoring original elements and articulating the banking theme. It mainly concerns the first two floors, where the original interiors have partially been preserved. In other premises, interiors speak the language of contemporary design. 80 unique interiors for the 101 guest rooms aim for the artistic atmosphere of the early twentieth century. That is why the graphic compositions of French Art Nouveau artists were used, such as Serge Gladky and Edouard Benedictus, who worked in a hand printing technique called pochoir.

While working on the project, we noticed that chipped ceiling plaster revealed brick barrel vaults on metal beams. Consequently, almost all ceilings from the first floor to the fourth floor were cleared from plaster, the brick was restored. Unfortunately, the authentic entrance door was not preserved, so we did not dare to guess what it looked like. Instead we used a glass door, interpreting it as air, although accentuated with a hanging stained glass that matches the patterns used for guest rooms. 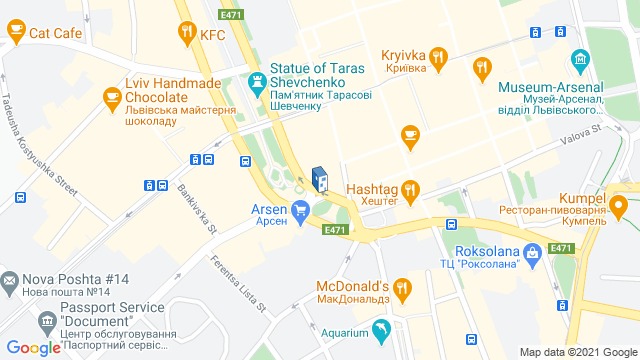 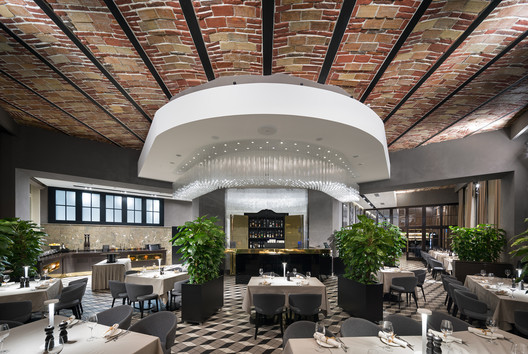