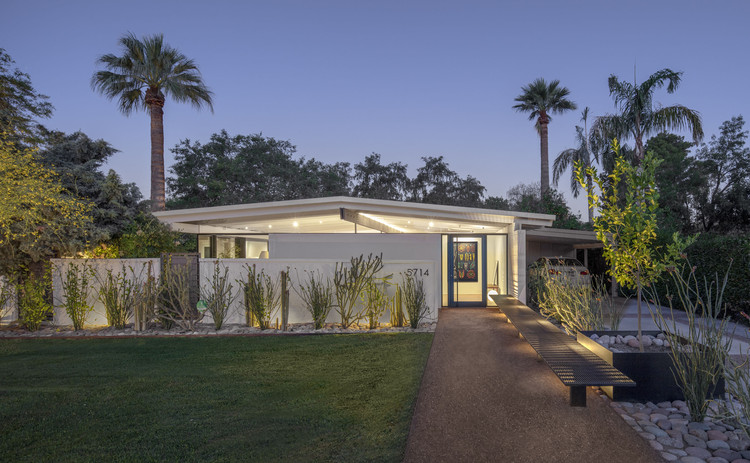 Text description provided by the architects. This project is a small but important phased remodel of a 1952 Haver Home within the architecturally significant Marlen Grove neighborhood (a former citrus grove) for a young ASU Law Professor that commutes from his Bernal Box in the Bay Area to stay here when the University is in session. Ralph Haver, AIA was one of the most prominent architects practicing here during the postwar boom in Phoenix and similar to A. Quincy Jones worked for developers like Eichler in California.

Our client was attracted to the significant architectural history of this community, but he knew that his new home had been poorly remodeled and wanted to fix it. In fact, it had been altered almost beyond recognition, but the masonry wall and exposed “tent” roof structure were mostly intact. There were four models in Marlen Grove, without question the most intact and most significant Haver Community in the Phoenix area, and through research, up and down the streets we discovered what we felt was our client’s original Haver Model.

We knocked on the door and spent an afternoon getting to know Bob and Helen Winkle, who had bought their home from a graphic designer over 35 years ago when design types, mainly architects owned most of the 53 homes that made up the now legendary Marlen Grove. We determined conclusively that their “Patio / Carport” Model (the only one intact in the neighborhood) was in fact our original model and set out to recover the spirit of the original “showpiece” model featured in sales brochures.

Our goal was to recover the generous spirit of these humble homes while injecting our own sensibility and sincere respect for the neighborhood scale as well as the generous light and shade provided by the “close-to-the-ground-tent-form” of the exposed beamed ceilings with their “ceiling light” clerestories, while not reducing the expanded square footage of the recently purchased 80’s footprint, if possible. Could we open the space - similar to the original open-air Patio / Carport Model, while creating privacy and openness to the south yard/garden that was an important tenet of each design, sunny in winter and shady in summer, indoor/outdoor Arizona living at its’ finest - just enough for everyone…

Our client had an extremely tight budget, so we agreed to do a simple sketch with a clear, substantively researched idea as an act of architectural historic preservation of not just a significant home, but of a significant Arizona community that still stands the test of time (after almost seventy years) as an inspiring example of how production housing can in fact be humane. After producing this sketch, along with a quick sketch-up model, we had agreed in advance to get estimates from a design-build architect that had worked for me and after establishing a tight, yet more realistic budget we produced a two-sheet set of permit documents and shifted 50% of our discounted design fees to construction administration. 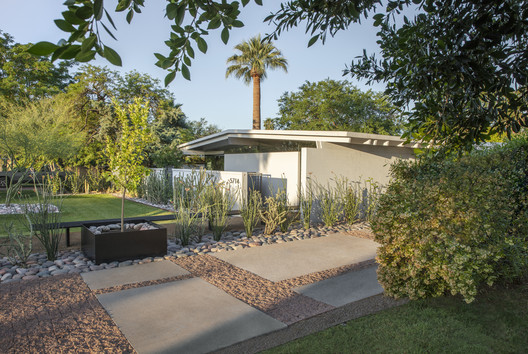