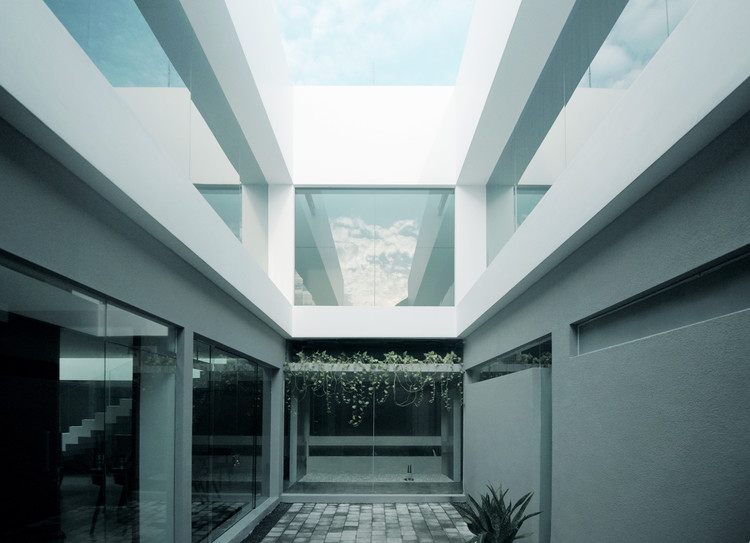 Text description provided by the architects. Surabaya is located at the eastern part of Java Island in Indonesia. It is one of the major cities in the country with a rich history of culture and architecture. The site of the project is located in an old housing complex with uniform design typology. It is to accommodate a young family of four and two kids. From the beginning, we want JL House, in the midst of typical clutter of architectural styles, imposing its calm order. An intervention to an established neighborhood. This intention resulted in a monumental but in contrast a breathing and living house.

Series of rigid and clean geometries are then introduced and reflected by the composition of the main two masses of the house. The lower one treated with textured dark grey paint sits as the foundation of the floating white mass hover over the landscape and open space.

Furthermore, the introduction of the courtyard as the central point further enriched the composition of the house. This is the soul of the house, both as design identity as well as functionality. It distributes fresh air as well as adequate amounts of lighting throughout the internal space. Furthermore, the client’s desire for a house with a clear boundary between private and public space led us to configure the spatial arrangements of the house as well as the transition between them. On ground level, the guest areas are located at the front with semi -public such as living and dining are located at the rear that is exposed to the courtyard as well as the backyard.

The transition of space from lower on ground mass to the elevated one is highlighted by skylight that allows the exposure of sky and rays of light. Other than its functionality, the introduction of skylight is to further enrich the journey between spaces internally. This leads to the arrangement of the master bedroom and kids’ bedroom that are centered as well around the courtyard. It gives every room adequate level of privacy as well as necessary exposure to the sun and fresh air.

Visually, this house appears as a monumental mass that is introduced to an old established housing compound with uniform yet organic design typology. But it also creates a dialog between old and modern, organic and order as well as formal and informal.