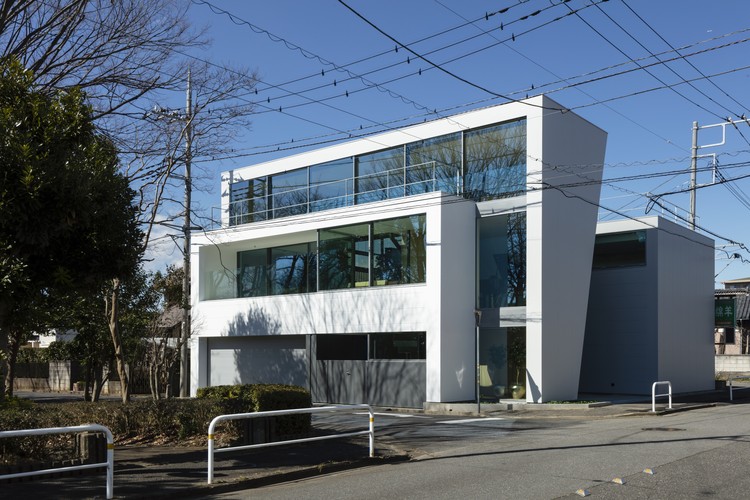 Text description provided by the architects. Overview, site, and key characteristics. Located on a relatively spacious corner lot in a residential neighborhood in the city of Tsukuba, this residence with a number of hobby rooms was designed as a place for the client to live while working in a different city from his family. The client, who is athletic and enjoys playing squash and working out, plans to use part of the house as a members-only gym in the future, making the design brief similar to that for a combined home and business. Although there are apartment buildings and other residences to the east and west of the lot, it is bordered on the north by a restaurant parking lot and on the south by a lush, quiet park, and naturally the client wanted to take advantage of these views.

An assemblage of stacked rooms covered by four arched structures. The layout was arrived at by first determining all the rooms the client required, from bathrooms to a squash court; roughly grouping these rooms into a gym zone, a living zone, and a miscellaneous zone; fitting them together according to size, length, height, and similar conditions; and finally adjusting this stacked arrangement based on setback regulations and other considerations related to the streetscape. These volumes were then integrated into a single building via four overarching gate-shaped frames lined up so as to block views from the west and east but allow breezes and lines of sight to pass through from north to south.

Split-level floors rising on a north-south axis and rooms offset from left to right. In terms of section design, the strong orientation of the living zone toward the greenery of the park was prioritized, with the squash court, training room, changing room, and other parts of the gym zone arranged behind it according to ceiling height. The private and public areas of the residence are clearly zoned by floor level, but within the living zone, where the client enjoys an easygoing lifestyle because he lives alone, rooms are joined in a single open, interconnected space whose split levels rise toward the back of the building.

In addition, the height of the third-floor balcony was adjusted to remove a low outdoor electrical line from view, the two roads bordering the corner lot were used to separate circulation paths for the gym and living zones, and a number of small adjustments were made to the positioning of the four overarching frames to meet corner setback regulations and accommodate the location of the garage, the condenser unit, and utility meters.

An interconnected living zone with many unique niches. Although the client’s family sometimes stays in the residence, the client lives there alone most of the time, which means that rather than the typical home design problem of mediating relationships between multiple inhabitants, the foremost issue was harmony between the space and the actions and feelings of its sole inhabitant. That was all the truer since the client often works at home and is therefore in the building for extended periods of time. The variations in floor level and the four interior colors are intended to bring a small degree of order to the unstructured life of a person living alone. 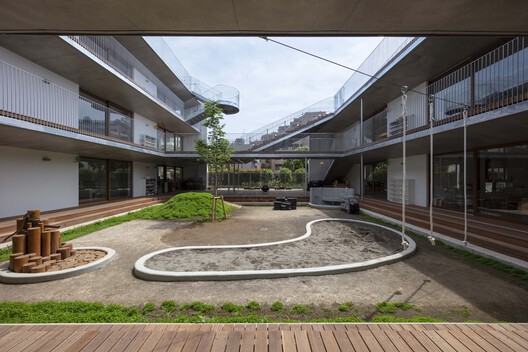 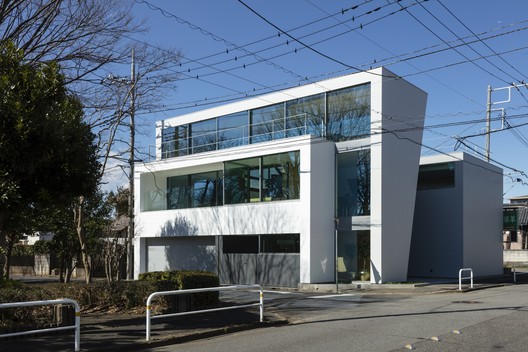