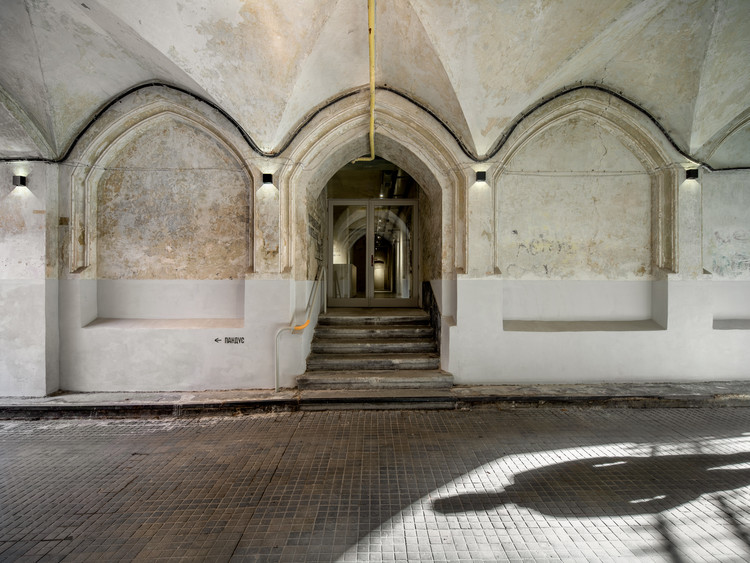 Text description provided by the architects. The ver first Municipal Art Centre has opened in Lviv at 11 Stefanyka street. The space is simple and functional with a lecture hall, a place to sit and work or relax. There is also a small multimedia library with a turntable, vinyl records and some rare books. A neo-Gothic building, bare walls with authentic murals inside, the first wheelchair ramp that was made following all the legal standards and requirements, paintings and chairs found in a dumpster (in the best traditions of Berlin interiors), modern quality furniture and light are among things that made the art centre controversial and non-trivial. Nobody expected such combinations in a municipal cultural institution where the design decisions impress visitors right from the doorstep.

The building itself is the first neo-Gothic construction in Lviv from the late 19th century. From the very beginning, it was occupied by offices and a printing house. After 1991, for more than 20 years it remained abandoned and cluttered. We removed an internal wall and created a big open space.  Then, we decided to keep and renovate everything authentic we would find there.

Since the premises were not used for a long time, we thought that original ceiling paintings could be still present under layers of plaster. We did not have much time or budget for profound research, nevertheless, we succeeded to find the paintings! Iryna Hirna, a painter and restorer from Lviv, joined us and taught workmen to sand walls and cover them with special agents to preserve the paintings. In the end, we found other paintings in the hallway after cleaning and sanding walls and ceilings there. Consequently, the driveway and the entrance to the gallery are also “ragged” preparing visitors to see something non-conventional. Soon, the paintings in the entrance group will be partly restored.

The gallery occupies 30% of the space. The white cube aesthetic is critical there, so we hanged drywall on a metal stud frame, so that the walls could breathe, giving a white and smooth space to visitors while keeping the authentic ceiling opened and untouched. There was no flooring, but screeds with traces and stamps of old Austrian tiles. In the late 19th century, concrete screed with marble chips (today’s terrazzo) was very popular. It is a very durable material and appropriate to that period, so we decided to put it back.

The windows in the inner yard were damaged and unsuitable for restoration, so we decided to replace them with new replicas. Later, we found authentic old brass handles and mounted them on those replicas so that they would not stand out too much from the context. Quality furniture was designed and made for the interior. We successfully combined a plywood exhibition cube covered with German plastic with tables in the multimedia library - planes made of thick plywood where neither the supports nor the legs are visible – and with the torn pieces of plaster.

One day, Lyana Mytsko, the head of the art centre, was passing by the dumpsters of the Lviv Conservatory and found there 20 lamps and thirteen painted boards for choreography lessons, which were probably created for a ballet class 50  years ago. Liana brought it to the construction site and together we decided to use these items in the kitchen of the art centre. A separate area in the space is a kitchen-café. By the way, the colour of the kitchen was chosen to match the painted boards. That is how the latter became the space’s special feature.

In one of the kitchen’s corners, we found glazed tiles. We suspect that they are from Ivan Levynsky’s factory (a famous Ukrainian architect). Previously, this type of tile was used only in the hallways, not inside the apartments, which is unique in this case. Following the placement of these tiles, we put experimental marks for the visually impaired: potentially traumatic angles and transitions between rooms with different functions were marked with contrasting colours. There will be also a 3D map for the blind and visually impaired at the reception. In addition, we made an inclusive restroom.

High-quality professional lighting was installed, which took us longer than usual, as we had to explain to all city officials what the difference was between household and professional lamps and why we could not go for the cheapest option. We really wanted to accentuate the accessibility and inclusion of the premise. A wheelchair ramp that meets all standards was built to enter the art centre. Since it was important to us to take into account all legal requirements and opinions of potential users, we asked Yaroslav Hrybalskyi, a social activist who uses himself a wheelchair, for help. The ramp is also made for mothers with strollers, for elderly people, and for children on bicycles and scooters. There are four-level handrails, the correct and safe angle of inclination highlighted by different shades of concrete with the correct texture.

“It is important for an architect and designer like me living and working in the city that this municipal art centre, financed from public funds, was made in an unusual way, without boring decisions. Thanks to the people involved in creativity and art, this space will be convenient for free and courageous people. I am glad that the officials believed in this project as being significant, that it would represent the city and serve for the development of art, culture, and Lviv. We made it. Many positive things are written and said about us, even by our competitors,” says Hrystya Badzyan, the architect of the project. 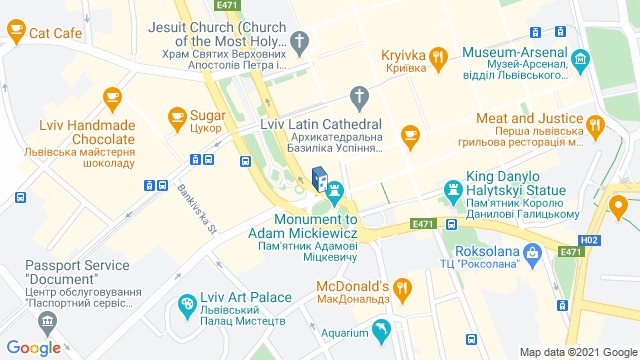