✕
Save
The World's Tallest Tower in Toronto and a Vertical City in Dubai: 10 Unbuilt Projects Submitted by our Readers
Share
Or
Copy

Scale dramatically shapes how we experience architecture and the built environment. Whether looking at buildings by volume, square area or height, the larger a project gets, the greater our perception changes. Monumental projects tell incredible stories of spatial experience, programming and design. Towering above us and around us, these large-scale works become landmarks in rural and urban contexts.

This week’s curated selection of the Best Unbuilt Architecture focuses on large-scale architecture located around the world. Drawn from an array of firms and local contexts, they represent proposals submitted by our readers. They showcase a wide array of approaches to designing at larger and larger scales, from an expansive arena in Vienna and a lush memorial in Singapore to the world's tallest tower designed to draw attention to poverty in Toronto.

Read on to discover 10 curated projects highlighting large-scale towers and mixed-use projects around the world, along with their project descriptions from the architects.

Architecture firm Luca Curci Architects presents THE LINK, a vertical city for 200,000 people. The project aims to rise above the challenge of population density by successfully combining vertical expansion with economic innovation. A self-sustainable city-forest, that will absorb CO2, produce oxygen for cleaner air and increase urban biodiversity. With interconnected communities’ programs.

“Tour Emergent” is the name of the new tower to be built on the Abidjan Plateau, property of the CNPS – Caisse Nationale de Prevoyance Sociale. Today the Plateau is Côte d’Ivoire’s administrative, commercial and financial centre and occupies a prominent position in West Africa. The design of the new tower responds to CNPS’s aspirations of building a unique building with striking architecture capable of becoming Abidjan’s new icon. The tower has 40 floors, 3 floors below ground and 37 floors above ground which correspond to a height of 160 m, with a total construction area of 39,000 m2.

Vienna-based Kronaus Mitterer Architects together with architect Reinhardt Gallister have won the EU-wide open two-stage architecture competition to design the new „Wien Holding Arena“ in Vienna, Austria. The project consists of a multifunctional indoor arena for 20.000 visitors and a 60m high hotel tower. It is located in the heart of Neu Marx, a new urban development area in Vienna‘s third district.

The tower consists of three principal parts. The first part is located below and consists of horse shelters and a high roof above them. The second part is in the middle and consists of several levels with observation terraces and galleries. The main detail of this part is a warm living room. The last third part is located in the upper zone of the tower and is a frequent wooden structure. It also has various viewpoints, places for observation and relaxation, and bypass galleries around each level.

A new football training centre for the Dalian Yifang Football Club. When complete, the development will be one of the world’s top training facilities, able to meet the needs of 18 teams with a total of 600 coaches and athletes. The design aim was to create a facility to aid in the club’s aspirations to progress in the Chinese Super League, and to address the current lack of continuity in the talent pipeline.

Two buildings, the “tower” and the “workshop”, were designed in the sense of contextual architecture. The tower is positioned at the head of the harbor basin. A second, lower structure -the workshop- is placed next to it. By its height it integrates the unequal pair into the neighborhood. In-between lays the piazza. An urban plinth will make it a lively place. With intelligent, renewable or recycled construction materials and a low-tech energy concept, a sustainable urban architecture is aimed at.

The Singapore Founders' Memorial is the commemoration of the founding of independent Singapore. Its environment, economy, history and culture are the actualization of its Founders' dreams and visoin. The Memorial design was made to be identical to a natural mountain with mounds adored with greenery, interweaving within it layers of sky gardens, greenery and outdoor spaces for acitivities and enjoyment.

Mongolia is a landlocked country in East Asia with abundant nature that consists of rows of mountains and deserts. The design site is located between the south tip of the central city of Ulaanbaatar and the departure point of other cities. Thus, its location is at the right front of the national park under development and behind the site are well developed residential towns. Given condition of the site offers vastly great views to the national park and mountains as well as the view towards the central city. The design was made to create connections to the project's unique surroundings.

Situated along the waterfront of the former Chicago Spire, the site has seen several proposals for super-tall towers; however, due to the financial collapse of 2008, construction was halted and left incomplete.  In response to the historical trends over the past 100 years, we decided to propose a building that contributes a public and environmental benefit to the city in which it operates.

Norm Li Studio and TAXI Advertising turn a statistic about poverty into the world’s tallest building for new United Way campaign. TAXI Toronto and United Way, along with Norm Li Studio and KPMB Architects, are bringing attention to the shocking reality of the size and scale of poverty in the Toronto area. They’ve imagined the tower we would need to build for the 116,000+ individuals and families in Toronto struggling to put a roof over their head. It’s called “The #UNIGNORABLE Tower,” and if it were real, it would be the world’s tallest building. 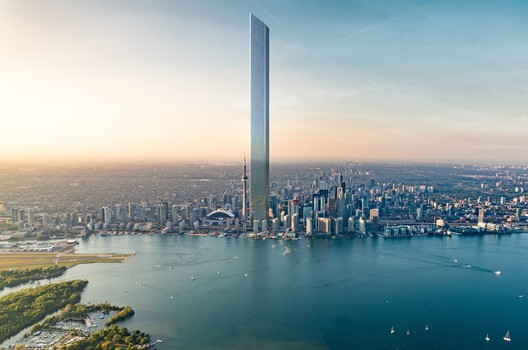