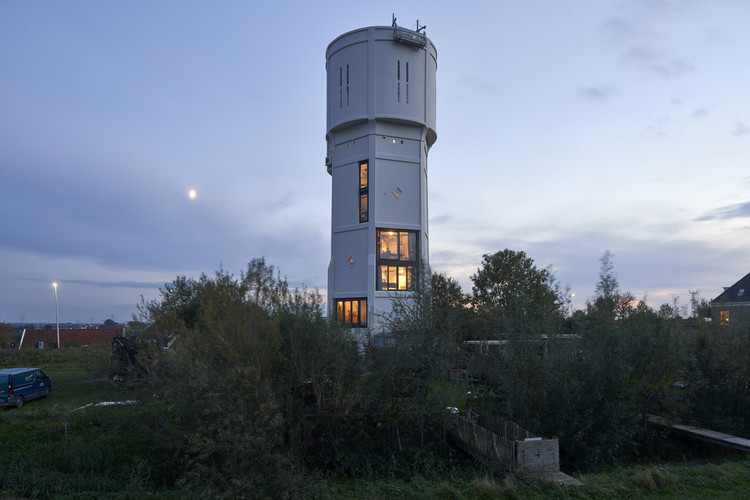 Text description provided by the architects. The transformation of the watertower in Nieuw Lekkerland by RV Architectuur, won the Dutch Watertowerprize 2020. The prize is awarded every year to owners of the best transformed watertower. This year the honour goes to two cousins. Both born and raised in a house right next to the watertower. In the year 2013 - only aged 21 at the time - they managed to buy the tower. The idea was to work gradually on the transformation during the next 10 years. Yet they did intend to start living in the tower as soon as possible. And not just by themselves. In the meantime, they both got married and started a family. Now the proud parents of 2 children each.

The tower and the area surrounding the watertower has totally been rebuild by their own hands for a relatively modest budget. They remodelled the tower and its surroundings totally according to their own taste. Apart from the effort and grit of the owners the jury of the Dutch Watertowerprize highlights the role of the architectural intervention that underlies the transformation. In their words:

“The basis of the successful transformation is formed by the powerful design of Ruud Visser and Fumi Hoshino. Huge floor-to-floor windows looking out over the river De Lek and the Dutch polder landscape contribute to the quality of the spaces inside and fit perfectly with the robust appearance of the watertower. It is refreshing to see that such an inspiring transformation can be realized with a small budget”

"The motto of the architects during the design process was: 'Do not change a water tower into a house, yet live in a water tower'. and exactly this was the strength of this transformation!” The watertower is situated on a dike just outside the village Nieuw Lekkerland. It is built in 1915. The view from the tower is breathtaking. On one side of the tower you look out over the river De Lek, on the other side one has a view on the typical Dutch polder landscape with its many windmills. On a bright day you can even see the windmills of Kinderdijk.

The design-study evolved around two main challenges: 1. How to create openings in the facade for daylight, without loosing the character of the watertower?

2. How to create a housing-plan that celebrates living inside a water tower, as opposed to one that turns the watertower into a 'normal' residential house? The housing-plan in this hexagonal tower with a diameter of 9 meters must meet all the housing and building regulations. Yet the ambition was to also celebrate 'living inside this unique watertower'. The tower will be divided into three sections: the garden-room of double height, and two dwellings of two floors on top of it. Every dwelling has two floors: a floor with living areas and a floor with sleeping-areas. Each section has another view of the landscape. Walking around spirally through the tower opens up a full panoramic view. So, one dwelling is looking over the river, the other over the polder and the garden-room is fixed to the garden. Each dwelling has its unique floorplan. The specific view dictates the orientation of the floorplan and both construction and layout are shaped completely in line with this. 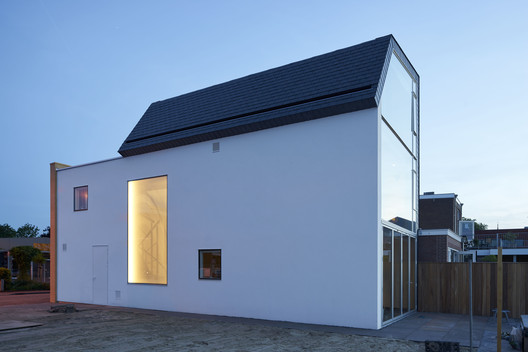 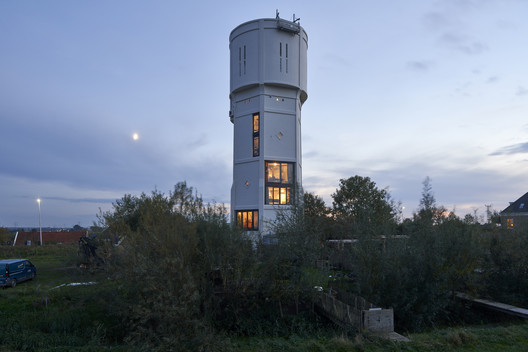